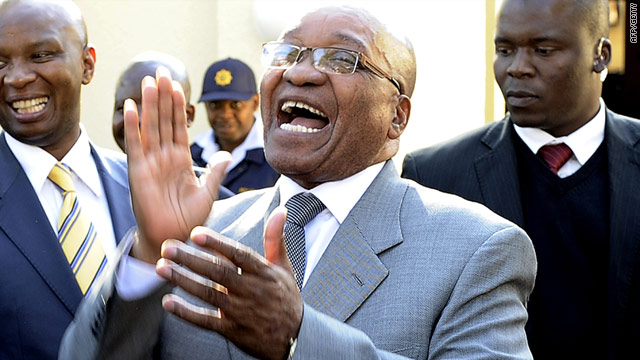 Johannesburg (CNN) -- President Jacob Zuma will visit Tripoli next week for talks with embattled Libyan leader Moammar Gadhafi, according to a statement on the South African leader's website.

Zuma will meet Gadhafi Monday in "his capacity as a member of the African Union high level panel for the resolution of the conflict in Libya," the statement said.

It is the second trip for Zuma, who was part of an African Union delegation that visited the nation last month.

That visit included talks on a cease-fire, which appear to have failed.

The visit is part of an international effort to end a months-long standoff as forces loyal to Gadhafi battle rebels demanding his ouster.

A coalition of nations under NATO have struck military targets in the nation as part of a U.N. mandate to protect civilians.

The airstrikes started in March after the United Nations Security Council authorized "all necessary measures" to protect civilians from government forces eager to crush the uprising.

Zuma's visit comes amid a diplomatic spat between the two nations over the fate of South African photojournalist Anton Hammerl, who has been missing in Libya since April and is believed dead.

South Africa says it got assurances from Libya that the journalist was alive. But a Libyan government spokesman said his whereabouts are unknown.

"We never had him with us at any stage," spokesman Musa Ibrahim said.

As the clashes and airstrikes rage on, the chief prosecutor of the International Criminal Court has requested arrest warrants for Gadhafi and two relatives, linking them to "widespread and systematic" attacks on civilians as they struggle to retain power in Libya.

Prosecutor Luis Moreno-Ocampo has said the court in The Hague will also investigate allegations of institutionalized rape in the war-torn country.

Gadhafi welcomes the court's investigation, a government official said, adding that prosecutors "have not been to Libya to do an investigation" amid the allegations.