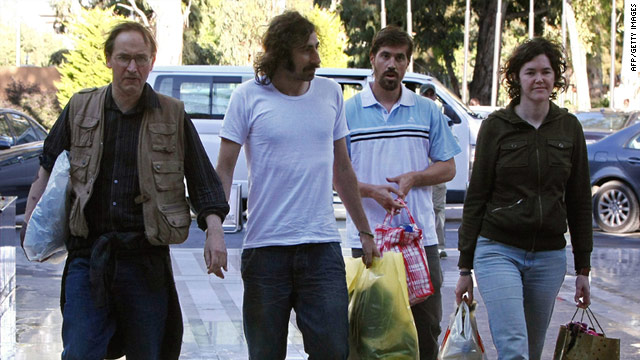 Tripoli, Libya (CNN) -- Four journalists are free weeks after they were captured by the Libyan military and then sentenced to jail for a year, a Libyan government spokesman said Wednesday.

Also, fighting resumed Wednesday between rebels and forces loyal to Libyan leader Moammar Gadhafi at the Dhehiba/Wazen border crossing with Tunisia, according to the Tunisian state-run news agency.

Battle in Libya rages on

At the same time, UNICEF announced a humanitarian campaign to raise $20 million for children and women inside Libya and for nearly 800,000 refugees who have fled to neighboring countries including Tunisia.

The freed journalists include two Americans: Clare Morgana Gillis, a freelancer for the Christian Science Monitor, the Atlantic and USA Today; and James Foley of GlobalPost. The others are Spanish photographer Manuel Varela, who also goes by the name Manu Brabo, and British journalist Nigel Chandler, Libyan government spokesman Musa Ibrahim said.

Ibrahim said a judge released the four journalists after ordering them each to pay a $164 fine for entering the country illegally. Ibrahim didn't know if the journalists had paid the fines yet.

When asked about missing South African photographer Anton Hemmerl, Ibrahim said the government isn't holding him and hasn't been able to locate him.

"We never had him with us at any stage," Ibrahim said.

Ibrahim spoke with the four journalists after they arrived in the lobby of the Rixos Hotel in Tripoli and told them they are welcome to stay and work in Libya under a visa.

South Africa's ambassador to Libya was also at the hotel trying to get any information on Hemmerl.

The four freed journalists were to spend the night at the hotel Wednesday, with their rooms paid for by the Libyan government, and then be driven to the Tunisian border, Ibrahim said.

Gillis, Varela and Foley were detained by pro-government forces in early April, according to the Committee to Protect Journalists.

Once taken to the border with Tunisia, Varela will head home to Spain, the Spanish foreign ministry said in a statement.

The foreign ministry declined to give any details earlier this month about Varela's situation, due to the "discretion and prudence" that his case demands, but Spanish media reported April 24 that he talked by phone to his parents in northern Spain and told them he was safe and being treated well.

Spain still has an embassy in Tripoli, although it evacuated its personnel from the city, like many other nations, as fighting between the regime of Moammar Gadhafi and rebels intensified in late March.

When asked about journalists being mistreated while in Libyan custody since violence erupted in February, Ibrahim said all journalists were treated "fairly" and "as good as possible," but he pointed out that the country is in armed conflict, and the military didn't know for sure whether persons captured were indeed journalists.

Ibrahim added that many former military personnel from Europe are now working with the rebels.

Since February, the Committee to Protect Journalists has tallied more than 80 attacks on members of the news media in Libya, including four deaths and 49 detentions.

Human Rights Watch and CPJ have called upon the Libyan government to account for missing journalists covering the conflict there.

Meanwhile, in Tunis, the government charged that Libya's rocket-firing at Tunisia is a violation of its sovereignty and puts citizens and infrastructure at risk, even though Tripoli pledged several times not to fire in the direction of Tunisia, the foreign ministry source told the Tunisian News Agency.

The Tunisian government warned of "immediate and disastrous consequences" to bilateral relations and said the "serious" attacks are likely to force Tunis to take "severe" measures such as reporting the violations to the U.N. secretary general in order "to defend its territorial integrity," the source told the news agency.

In a related matter to Libya, UNICEF issued its appeal to raise $20 million for the Libyan crisis and said more than 1 million people may have been affected by the conflict, especially as almost 800,000 Libyans have fled to Egypt, Algeria, Niger, Chad, Sudan and Tunisia, the group said in a statement Wednesday.

"Children have been deeply affected by this conflict. Their rights to learn, to play and to express themselves have been compromised. UNICEF and partners are working to support the community in their solidarity to create safe spaces for all Libyan children," Shahida Azfar, UNICEF regional director for the Middle East and north Africa, said in a statement.

CNN's Michael Martinez and Al Goodman contributed to this report.