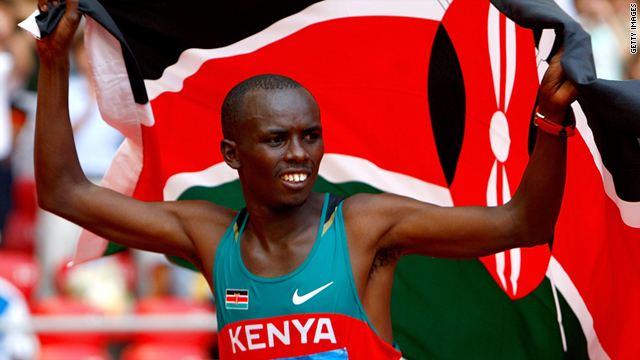 Samuel Wanjiru celebrates after winning the Men's Marathon in the National Stadium during Day 16 of the Beijing 2008 Olympic Games on August 24, 2008 in Beijing, China.
STORY HIGHLIGHTS
RELATED TOPICS

Wanjiru jumped from the second-floor of his home late Sunday after his wife caught him in the company of another woman, said Jasper Ompati, a police official in Nyahururu.

Wanjiru's wife, Tereza Njeri, and another woman were taken to the police station to give statements but were not considered suspects, Ompati said. The death remains under investigation, he said.

Njeri, who lives in Nairobi, returned home unexpectedly to find the two together, Ompati said. Wanjiru is believed to have jumped after his wife locked him inside a bedroom on the second floor, making it impossible for him to leave, he said.

Kenyans were mourning the death of Wanjiru, who was considered a national hero. Hundreds were lining up to view his body at a Nyahururu funeral home.

Athletics Kenya, the governing athletic body, said the country lost a great athlete. The association said it had pinned its hopes on Wanjiru to win another medal at the London Olympics in 2012.

"He's left a gap that will be hard to fill," said David Okeyo, the secretary-general of Athletics Kenya.

The International Olympic Committee praised Wanjiru as an accomplished runner who will be remembered for winning his country's first Olympic gold medal in the marathon and setting a new Olympic record in the process.

"Our thoughts are with his family and friends," the IOC said in a written statement sent to CNN.

At 21, Wanjiru was the youngest gold medal winner in the marathon at an Olympics since 1932.

After his Beijing triumph, Wanjiru has set about dominating the marathon distance, claiming a number of victories in races.

It helped him be crowned the men's champion in the 2009 and 2010 world marathon majors series.

In recent years, Wanjiru has had a number of troubles.

In December 2010, Wanjiru was charged with making death threats against his wife and illegally possessing an AK47 rifle. At the time, prosecutors alleged Wanjiru was drunk when he made the threats.

Wanjiru pleaded innocent to the charges during a court appearance in his home town of Nyahururu. His wife later dropped the charges, though he still faced a weapons charge.

Wanjiru was forced to withdraw from the London Marathon, a premier running event ahead of the 2012 Olympics, after he was involved in an automobile accident in January in Kenya.