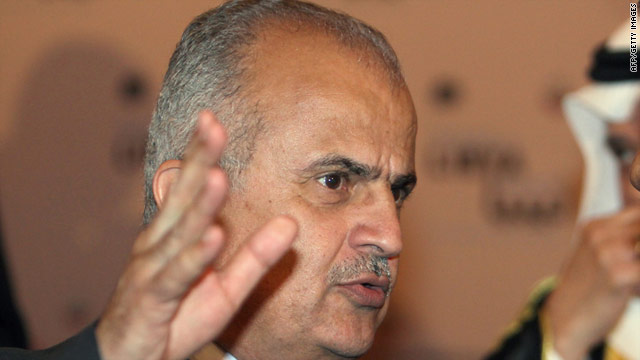 The visit lasted a few hours, according to Deputy Foreign Minister Khalid Kaim, who said the Libyan officials requested U.N. observers on the ground and gave al-Khatib letters to share with the U.N. Security Council that describe "provocations" by NATO.

Meanwhile, Libyan state television reported that a fresh NATO airstrike hit the western city of Zuwara, near the Tunisian border. Tunisia's state news agency TAP also reported an airstrike on government troops and radar installations near the border, where thousands of refugees have been pouring out of Libya amid the conflict.

There was no immediate confirmation of the attacks from NATO. Allied warplanes have been bombing Libya since March 31 under a U.N. resolution that authorized "all necessary measures" to protect civilians during the uprising against Gadhafi that began in February.

Opposition fighters are demanding freedom and an end to Gadhafi's nearly 42-year rule. Rebel forces now control most of eastern Libya and have set up a provisional government headquartered in Benghazi.

Gadhafi is among three Libyans facing arrest warrants from the International Criminal Court for alleged crimes against humanity, an official with direct knowledge of the case told CNN Saturday. The court's chief prosecutor, Luis Moreno-Ocampo, is expected to announce Monday that he's seeking the warrants.

Blair: Syria will end up like Libya
RELATED TOPICS

Kaim dismissed the possible ICC action, saying that because Libya is not a signatory of the Rome Statute -- which established the ICC -- the government will "just ignore it."

Moreno-Ocampo said in early March that he planned to investigate Gadhafi, the first time the court has launched a probe into allegations of crimes against humanity, as a conflict unfolded. The allegations include the killings of unarmed protesters by security forces and the use of displacement, illegal detentions and airstrikes against civilians.

Investigators have looked at the most serious accusations in Libya since February 15, when demonstrations against Gadhafi ramped up, Moreno-Ocampo said. The chief prosecutor must present all his evidence to a panel of judges before the court in The Hague, Netherlands, can decide whether to issue arrest warrants, which can take time.

It's unclear whether or how the ICC's actions would affect any negotiations.

A spokesman for the Transitional National Council declined to comment on the ICC action, noting that it has not yet been officially announced. But in Benghazi, hundreds of protesters marched in the streets Saturday demanding justice be served on Gadhafi, his family and senior officials for alleged crimes they committed against humanity.

"We want Gadhafi to be arrested and then possibly executed," said Noha Salem, a protester who marched along Amr ibn Alas street near the old section of Benghazi.

"All Libyans have been affected by those crimes, even little kids," she added. "He has been committing atrocities since 1969, not just since the start of this revolution."

The International Criminal Court's actions come after speculation last week about whether the combative Gadhafi had been injured in NATO airstrikes on his compound. However, Gadhafi's voice was heard on Libyan state-run television Friday in an attempt to assure his people that he is alive and in a place where "you cannot kill me."

Kaim insisted Sunday that the Libyan government believes NATO is targeting Gadhafi with its airstrikes.

Rebel leaders have been trying to drum up international support, dispatching top leaders of their Transitional National Council to Europe and Washington.

Mahmoud Jibril, the top representative of the council, met with French President Nicolas Sarkozy and Foreign Minister Francois Fillon in Paris Saturday. France has been the strongest backer for the Libyan rebels and the NATO air campaign that is targeting Gadhafi's resources on the ground.

Jibril had tried to secure formal recognition for the interim council from the White House in meetings in Washington on Friday but fell short of getting one. However, National Security Adviser Tom Donilon said the U.S. views the group "as a legitimate and credible interlocutor of the Libyan people," according to a White House statement released after the Friday meeting.