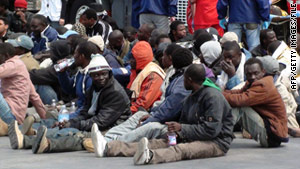 Refugees from Libya wait after disembarking from a boat onto the Italian island of Lampedusa on April 19, 2011.
STORY HIGHLIGHTS
RELATED TOPICS

Lampedusa, Italy (CNN) -- More than 400 people fleeing Libya and Tunisia arrived overnight in an Italian island on Saturday, the latest in a stream of refugees escaping volatile and unstable North Africa.

The U.N. High Commissioner for Refugees said the people reached the Mediterranean island of Lampedusa in two boats, one from Libya and the other from Tunisia.

The vessel from Libya carried 199 people fleeing the country's civil war, and the other carried 218 Tunisians looking for better lives in Europe.

Many of the refugees are from sub-Saharan Africa, including Sierra Leone and Senegal. Others include Bangladeshis and Egyptians.

More than 30,000 migrants and refugees from Tunisia and Libya have risked this dangerous journey to Lampedusa since last February.

The number of new arrivals from Tunisia has reduced somewhat, thanks in part to a recent agreement with Italy to improve patrolling along the Tunisian coast.