By Mohamed Fadel Fahmy and Ian Lee, For CNN 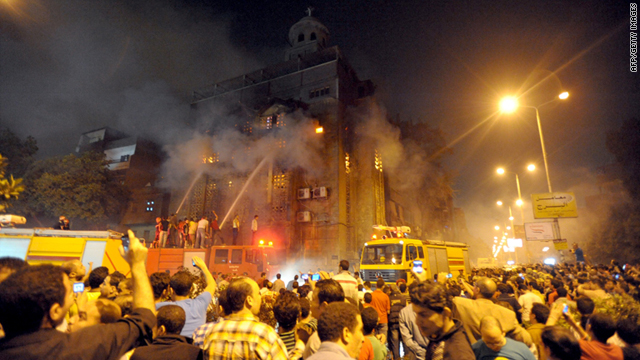 Egyptians gather as firefighters extinguish a blaze at a church following clashes at another church between Muslims and Christians in Cairo on Sunday.
STORY HIGHLIGHTS
RELATED TOPICS

Cairo, Egypt (CNN) -- At least six people were killed and 120 injured in sectarian clashes outside a church in Cairo on Saturday, officials said.

A group of Muslim Salafists attacked the Saint Mena Coptic Orthodox Church. Gunfire rang out as people sprinted for cover.

"With my own eyes I saw three people killed and dozens injured," said Mina Adel, a Christian resident. "There's no security here. There's a big problem. People attacked us, and we have to protect ourselves."

He said the clashes were sparked by reports of a Christian woman who married a Muslim man and was allegedly being held inside the church.

State TV, citing a source at the Health Ministry, said that eight people died and 144 were wounded in the violence.

Nearby, firefighters responded to a blaze at the Saint Virgin Mary's Coptic Orthodox Church. Hundreds of residents stood outside as it burned and two men were seen jumping from a window of the building.

Authorities sent soldiers and police to help secure the area.

Tensions have risen this year between Egypt's Muslim majority and its Coptic minority.

A Coptic church in the town of Alexandria was bombed on New Year's Day, killing 23 people -- the deadliest attack on Christians in Egypt in recent times.

In November, a group with ties to al Qaeda in Iraq announced that all Christians in the Middle East would be "legitimate targets," as the group's deadline for Egypt's Coptic church to release alleged Muslim female prisoners expired.

The religion split with other Christians in the 5th century over the definition of the divinity of Jesus Christ.