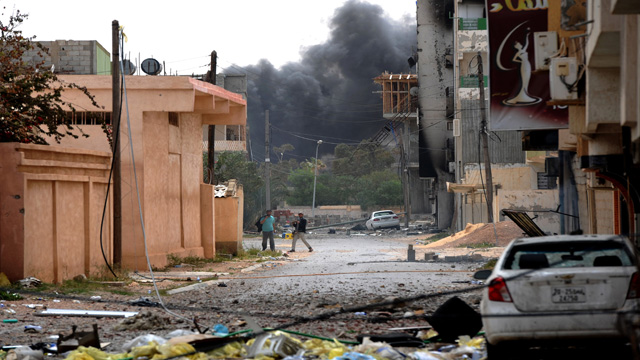 "It's just hell," said Marie Colvin, a foreign affairs correspondent for the Sunday Times of London, who has been in the city for a week. "Civilian neighborhoods are being decimated as we speak." She said that at least 10 people had been killed and at least 30 others wounded.

But figures were difficult to confirm; CNN was not in the city.

A resident of Misrata who asked to be identified only as Mohammed said Monday that six people were killed in the morning.

A doctor at a hospital in Misrata put the number of dead Sunday at 16, with 71 wounded.

The indiscriminate shelling began after rebel forces routed forces loyal to leader Moammar Gadhafi from the city center early Sunday, Colvin said. The rout came after rebels moved from building to building along Tripoli Street, the main boulevard, ousting government forces, she said. Twenty-five rebels were killed in one day, and an undetermined number of Gadhafi soldiers were killed, she said.

At the fruit and vegetable market, government tanks that had been hidden under loading bays were set afire over the weekend. Their position there underscored the difficulty of NATO airstrikes in discriminating between government forces and civilians.

Since then, stationed on the city's edge, government forces have been firing shells randomly into residential neighborhoods of the city, she said.

"It's a free-fire zone on civilians," she said from the hospital, where she said she had seen casualties that ranged "from loss of limbs to an 8-year-old boy struck in the ankle by shrapnel. He'll keep the foot, but he was in bad shape."

Outside, a white tent served as a triage area; a refrigerator truck was packed with bodies.

When two people were killed in one house, the family got into a car, but it too was hit, killing a man and two children, she said.

Almost all of the shops in the city were shut, she said. Along Tripoli Street, "every single building has been hit by shells." Some bakery owners were giving away bread, and a few stores on the other side of town remained open, she said.

As of Monday night, the seaside city remained surrounded on three sides, she said.

Last week, Libyan Deputy Foreign Minister Khaled Khaim said that Gadhafi's military was withdrawing from Misrata and that tribal leaders would deal with the rebels.

But rebel commanders told Colvin that there were no negotiations going on between them and tribal leaders, the reporter said. The government's assertion that such talks were ongoing "appears to be a fig leaf or Gadhafi trying to cover the fact that his troops have been defeated," Colvin said.

Misrata has been the scene of some of the deadliest battles of the war as rebels attempt to oust Gadhafi, who has been in power for 42 years.

In all, hundreds of people have been killed in the battle for the city, which has been under siege by Gadhafi's forces for seven weeks. Its population of about 450,000 makes it the country's third-largest city.

But that number has been dropping as residents have sought to get out. On Monday, the International Organization for Migration said it had taken nearly 1,000 stranded migrants -- most of them from Nigeria -- and 17 civilian casualties from Misrata to Benghazi on Sunday, with more such efforts planned.

The accounts of dire conditions in Misrata came as a government official said Gadhafi was well and in command of the country's affairs, despite what the official called a NATO attempt to kill him by bombing his compound in the capital city of Tripoli.

"The message that was sent by NATO in the early hours of this morning was sent to the wrong address," Mussa Ibrahim said in a written statement.

In a tour of the aftermath, Ibrahim said the flattened structure was a civilian office building.

In a statement, NATO said the target was a communications center in central Tripoli that had been used to coordinate attacks against civilians.

NATO is leading an international military operation in Libya that includes airstrikes targeting Gadhafi's military resources. It is operating under a U.N. Security Council resolution authorizing the use of force to protect civilians.

"The two leaders agreed that additional pressure is necessary to strengthen the civilian protection mission, and the president emphasized that the best way to ensure the safety of the Libyan people is for Gadhafi to leave power," the statement said.

"We have no independent means of verifying reports of possible civilian casualties," NATO said in a statement on its website.

NATO has been issuing warnings to Libyan civilians to stay away from military sites and equipment, especially around Misrata.

Since NATO took command of Operation Unified Protector on March 31, its aircraft have flown more than 3,700 sorties and more than 1,500 strike sorties.

Over the weekend, NATO aircraft destroyed multiple-rocket launchers, armored personnel carriers, bunkers and storage facilities in and around Misrata, Tripoli and Sirte, the alliance said.

"We are bringing all our capabilities to bear on all parts of the Gadhafi regime that remain intent on harming the civilian population," NATO spokeswoman Oana Lungescu said in a statement. "As decided by the foreign ministers of NATO and operational partners, we will keep up the pressure until all attacks against civilians have stopped, Gadhafi's forces have withdrawn to bases, and full and unimpeded humanitarian access has been ensured."

The rebels, under the umbrella of the Transitional National Council, received a pledge Sunday from Kuwait for about $180 million. The announcement came during council chief Mustafa Abdel Jalil's visit to Kuwait, Kuwaiti state-run television reported.