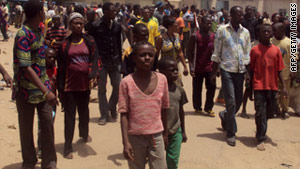 There is no official death toll, but witnesses say hundreds have died. The government has provided few other details out of concern the violence could spiral.

The election of President Goodluck Jonathan, who is from the majority-Christian southern part of the country, sparked violence in the Muslim-dominated north last week.

Northern Muslims in some areas charged that the elections were rigged. Armed protesters in the region prowled the streets chanting the name of former military ruler Muhammadu Buhari, the main opposition frontrunner.

The last election four years ago was widely condemned for rampant vote rigging, violence, theft of ballot boxes and intimidation. While the Monday elections were marred by violence, reports of underage voting and other logistical problems, observers considered it an improvement.

World leaders have urged the west African nation to probe allegations of ballot stuffing and unusually high turnout in some areas.

After he was declared the victor, Jonathan warned perpetrators that persistent postelection violence could threaten the stability of the country.

More than 40,000 people are displaced in the north, according to the aid group. Government officials have declined to release the number of fatalities or injuries over fears it could prompt revenge attacks.

Nigeria is Africa's largest oil producer and its most populous nation with 150 million people.