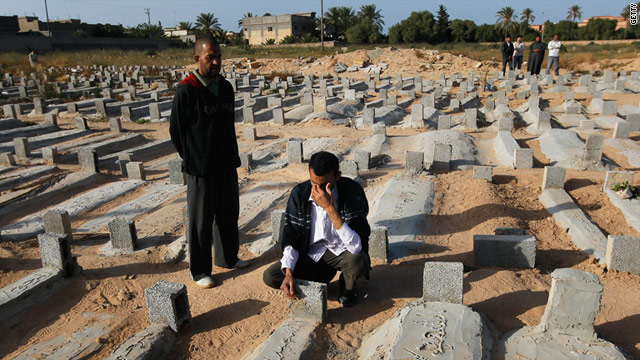 Will there be military intervention in Libya on humanitarian grounds?
STORY HIGHLIGHTS

Tripoli, Libya (CNN) -- France and Italy announced Wednesday that they will send military officers to Libya to advise rebels fighting for the ouster of leader Moammar Gadhafi and his regime.

French Defense Minister Gerard Longuet has ruled out sending ground troops to fight alongside the rebels. "This is a real issue that deserves an international debate," he said, adding, "We are working within the framework of the 1973 resolution," a reference to the U.N. resolution that authorized action in Libya. "You cannot please everyone all the time," he said.

Britain to send military into Libya

What is Gadhafi's fate?
RELATED TOPICS

"The president, obviously, was aware of this decision and supports it, and hopes that -- believes it will help the opposition," said Carney. "But it does not at all change the president's policy on no boots on the ground for American troops."

Britain said its contingent of military officers will be sent to the rebel stronghold of Benghazi to serve in an advisory role. The team will work with the Transitional National Council to help the opposition improve its military organizational structures, communications and logistics, the British Foreign Office said. It will also help deliver aid.

"This deployment is fully within the terms of UNSCR 1973 both in respect of civilian protection and its provision expressly ruling out a foreign occupation force on Libyan soil," Foreign Secretary William Hague said.

The United States is not moving toward sending military advisers, according to a U.S. military official with knowledge of ongoing discussions within the U.S. military. The White House remains adamant there will be no U.S. ground forces in Libya, though U.S. intelligence operatives remain there, the source said.

The official pointed out that U.S. military advisers' record in past conflicts is mixed. Perhaps the most obvious example, the official said, dates to the Vietnam conflict, when the U.S. military's role grew from an advisory one in the first years into a full-fledged conflict. If the United States were to send advisory troops to Libya, it would then have to provide security, transportation, supplies and other gear, and would have to have units on standby for emergency extraction if the advisory troops ran into trouble, the source said.

U.S. Secretary of State Hillary Clinton said Wednesday she has recommended that President Barack Obama authorize the U.S. government to send up to $25 million in non-lethal commodities and services to support Libyan rebels, including the Transitional National Council.

She defended the work of the opposition. "It was not a group that had been planning to oppose the rule of Gadhafi for years; it was a spontaneous response within the context of the broader Arab Spring," she said. "These are mostly business people, students, lawyers, doctors, professors who have very bravely moved to defend their communities and to call to an end to the regime in Libya."

"We are pleased with the results, and I think it's a prelude to more cooperation," he said. "The more advisers we have on the ground, the better coordination we'll have on the battlefield."

The announcements from the European nations came as Transitional National Council President Mustafa Abdul Jalil was in Europe for meetings with leaders.

Qatar and the UAE are among the countries contributing to the international effort in Libya.

Libyan Foreign Minister Abdul Ati al-Obeidi on Tuesday blasted Britain's announcement that it was sending military advisers. In an interview with ITN, he called it a step toward "confrontation."

In the besieged city of Misrata, four people were killed Wednesday as Gadhafi's forces indiscriminately shelled residential areas, according to an opposition spokesman who wanted to be identified only as "Mohammed" for safety reasons.

At least 27 people have been killed and 142 have been injured this week, Mohammed said.

Tim Hetherington, a photojournalist who was nominated for an Oscar for a gritty and harrowing documentary about the Afghan war, was killed in Misrata, the president of the agency that represented him said Wednesday.

And Getty Images Staff Photographer Chris Hondros died Wednesday of wounds, a spokeswoman for the photo agency said. "Chris never shied away from the front line having covered the world's major conflicts throughout his distinguished career and his work in Libya was no exception," said Manager of Public Relations Jodi Einhorn. "He will be sorely missed."

Two other photographers, Guy Martin and Michael Christopher Brown, were wounded, according to the New York Times.

Libyan Foreign Minister al-Obeidi said the government would consider a cease-fire in Misrata if it was on both sides. "I think the only way is give peace a chance" through a general cease-fire, he told ITN.

But Abdul Hafiz Ghoga, deputy chairman of the Transitional National Council, rejected the offer, which he said would have included an interim government, free elections in six months and reform that would include Gadhafi's future role.

He added, "They have already made a statement that Gadhafi is not willing to leave and that he will stay here and fight until the last drop of his blood, and if that is his choice and that is the case, then the Libyan people will hunt him down, find him and charge him with the criminal offenses he's created against the Libyan people."

The U.N. High Commissioner for Human Rights Wednesday said some of the Libyan government's attacks on Misrata could go beyond warfare.

A statement from the office of the U.N. High Commissioner for Human Rights, Navi Pillay, said she condemned "the reported repeated use of cluster munitions and heavy weaponry by Libyan government forces in their attempt to regain control of the besieged city of Misrata, and said that such attacks on densely populated urban areas, resulting in substantial civilian casualties, could amount to international crimes."

Libyan leaders have repeatedly denied targeting civilians and insisted that the rebels are criminals wreaking havoc on the country.

UNICEF, the U.N. children's agency, said Wednesday that 20 children have been killed and "countless others injured" in Misrata alone.

Among rebels, calls for help have been increasing each day.

Aid agencies are afraid to enter areas such as Misrata, which is being targeted by Gadhafi troops, opposition activist Mohamed Ibrahim said. "Some of them, they come. But most of them, they come near ... they hear the shelling and everything and they go back," he said.

Aid groups have been attempting to pluck desperate people from Misrata, which is hemmed in by Gadhafi's forces on three sides. The only escape route is by the city's port -- an area witnesses said has also been shelled by Gadhafi's forces.