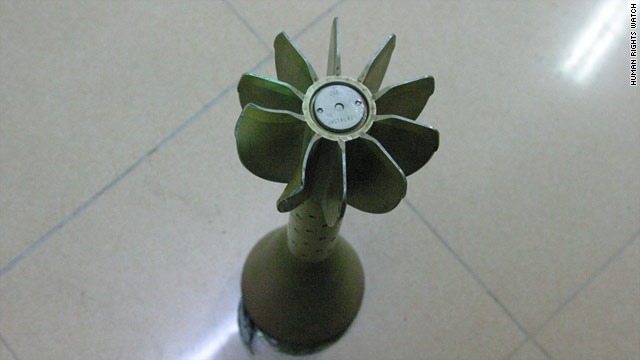 A remnant base section of a MAT-120 cluster munition recovered in Misrata was manufactured by Instalaza SA of Spain.
STORY HIGHLIGHTS

A spokesman for the Libyan government denied the charge.

The organization said in a statement that it had seen three cluster munitions explode over the el-Shawahda neighborhood of Misrata on Thursday night. Researchers inspected debris from a cluster submunition and interviewed witnesses to two other apparent cluster munitions strikes, the statement said.

HRW inspected the submunition, which it said had been discovered by a New York Times reporter, and determined that it was a Spanish-produced MAT-120 120mm mortar projectile, which opens in the air and releases 21 submunitions across a wide area.

The submunitions explode on contact, disintegrating into molten metal that can strike people and penetrate armored vehicles, it said.

"It's appalling that Libya is using this weapon, especially in a residential area," said Steve Goose, arms division director at Human Rights Watch. "They pose a huge risk to civilians, both during attacks because of their indiscriminate nature and afterward because of the still-dangerous unexploded duds scattered about."

Most nations have banned their use through the Convention on Cluster Munitions, which became international law in August.

The mood in Libya's capital

"Libya needs to halt the use of these weapons immediately, and take all steps to ensure that civilians are protected from the deadly remnants they have left behind," Goose said.

Human Rights Watch said cluster munitions were used about a kilometer from the battle line between rebel and government forces and appear to have landed about 300 meters from Misrata Hospital.

But the organization, citing security concerns, said it could not inspect the impact sites and had not determined whether any civilians were hurt.

A spokesman for the Libyan government said the charge was not true. "We would never use such weapons against Libyan people," Musa Ibrahim said. "Also, the world is watching, so we just could not do it."

The charge came as Western leaders described a "medieval siege" Friday on Misrata, which has been pounded for days by Gadhafi's mortar and artillery rounds.

Some 1,200 of the more than 8,000 migrants stranded in the besieged city were rescued Friday by the International Organization for Migration (IOM). The group chartered a boat to pluck them from the war-torn port city and deliver them to the Libyan rebel stronghold of Benghazi in the eastern part of the country.

The aid group said the migrants were from various nations and included women and children. All were weak and dehydrated. Medical agencies set up a small hospital on deck.

The IOM identified 8,300 migrants living in the open around the Misrata port without adequate food or medical care as the city came under regular fire. The group hopes to send back the chartered boat to evacuate a second round of people if it receives enough donations.

"This is a terrible situation," said Pasquale Lupoli, the group's Middle East representative. "They are the forgotten victims of the crisis and shouldn't be."

In Benghazi, about 2,000 anti-Gadhafi demonstrators held up signs and shouted slogans that made it clear they are still fighting for Gadhafi's removal. "Gadhafi Go to Hell," read one. "Thanks for USA and NATO and France and UK," read another.

But several participants voiced concern that the NATO efforts were not enough, telling CNN that without more support, they may fail.

"They didn't do anything, the NATO," one man said.

The military deadlock in Libya between Gadhafi's forces and rebels shows little sign of resolution.

Western powers have said repeatedly that airstrikes were intended to fulfill a United Nations mandate to protect civilians. However, in a joint opinion piece that appeared Friday in three European newspapers, U.S. President Barack Obama, French President Nicolas Sarkozy and British Prime Minister David Cameron wrote about better times once there is a regime change.

"Our duty and our mandate under U.N. Security Council Resolution 1973 is to protect civilians, and we are doing that," they wrote. "It is not to remove (Gadhafi) by force. But it is impossible to imagine a future for Libya with (Gadhafi) in power."

"The International Criminal Court is rightly investigating the crimes committed against civilians and the grievous violations of international law," they wrote. "It is unthinkable that someone who has tried to massacre his own people can play a part in their future government."

The leaders likened the fighting in Misrata to a medieval siege and called on Libyan troops to return to their barracks.

"We are convinced that better times lie ahead for the people of Libya," they wrote.

Opposition forces kept up the fight Friday, saying they had pushed west from Ajdabiya to the town of al-Brega, which has changed hands several times and appears to remain under the control of Gadhafi loyalists.

Warplanes were heard Friday over Ajdabiya, but CNN could not independently verify the rebel advance.

The debate over NATO's strategy in Libya buzzed at high-level meetings this week in Europe as well as in Qatar, host of the first gathering of the international Libya Contact Group, charged with mapping out peace for Libya.

With the conflict at a deadly impasse, Britain and France have been pressuring NATO to step up airstrikes.

At a NATO summit in Berlin on Thursday, Secretary General Anders Fogh Rasmussen told reporters that NATO has the necessary assets to continue aerial strikes, but the tactical nature of the fight has changed.

"Now they hide their heavy arms in populated areas, where before many targets were easier to get to," Rasmussen said. "To avoid civilian casualties, we need very sophisticated equipment. So, we need a few more precision fighter ground-attack aircraft for air-to-ground missions."