By Christian Purefoy and Barry Neild 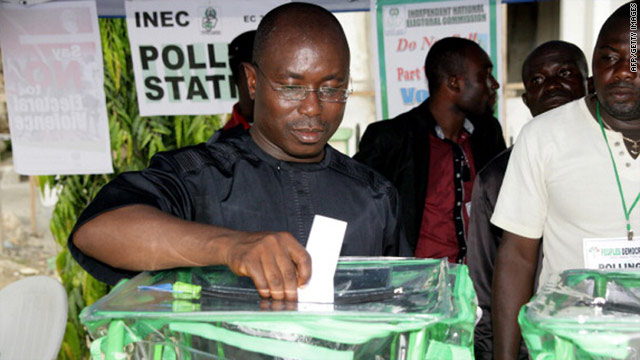 A man casts his vote during Nigeria's parliamentary polls on April 9, 2011.
STORY HIGHLIGHTS

(CNN) -- Nigeria goes to the polls on Saturday to elect a new president. But can Africa's most populous nation and the continent's major oil producer stage a free and fair vote to bring the changes it needs to strengthen stability both at home and across the region?.

Why does it matter?
Oil and economic muscle. Thanks to its size and abundant resources, Nigeria has both regional and global strategic importance. The country of 150 million people is Africa's most populous and its biggest market. Its booming economy is on track to surpass South Africa's next year to become the continent's largest.

As the world's fourth largest oil exporter to the United States, Nigeria generates billions of dollars in oil revenues. As a key regional peacekeeper, Nigeria's democratic processes are also seen as a benchmark for other African nations.

"The stability and success of its political process is crucial to the stability and growth of Africa," says Peter Cunliffe-Jones, author of "My Nigeria: Five Decades of Independence."

Who are the main candidates?
Incumbent Goodluck Jonathan is seen as the front-runner. His People's Democratic Party has been in power since a return to democracy 12 years ago. Jonathan, a former zoologist with a penchant for stylish hats, assumed the presidency in 2010 after his predecessor, Umaru Yar'Adua, left for medical treatment in Saudi Arabia and subsequently died.

The battle for Nigeria's presidency

Behind the scenes of Nigeria election
RELATED TOPICS

Jonathan hails from the country's oil-rich southern Niger Delta region. If he wins, he will be the first politician from the Delta ever elected as president.

Muhammedu Buhari, a retired general who has unsuccessfully run for office several times, is seen as Jonathan's main challenger. Buhari's Congress for Progressive Change party has massive support in the country's north -- which has been Nigeria's powerbase for 38 years of Nigeria's half-century existence since independence.

If victorious, Buhari -- who put his previous election defeats down to foul play -- will be the first candidate ever to beat an incumbent.

Jonathan's other significant rival is Nuhu Ribadu, a former chairman of Nigeria's anti-corruption committee who is now the candidate of the Action Congress of Nigeria, the largest opposition party. Ribadu's powerbase lies in the country's southwest.

What are the key issues?
Security, oil, electricity and corruption.

Nigeria's oil industry is the country's main source of wealth, but also a source of many of its woes. Most major international oil companies have interests in Nigeria, creating billions of dollars in export revenues.

Recent years have seen damaging attacks on Niger Delta oil facilities and workers by marginalized militias demanding a greater share of this wealth. Some politicians, often also accused of manipulating ethnic-religious tensions for personal gain, are accused of using the militias to support their power bases.

An estimated 13,500 people have died in religious or ethnic clashes since the end of military rule in 1999, Human Rights Watch said in a report last year.

Corruption, a key platform for Buhari and Ribadu, is blamed for the loss of billions of dollars of Nigeria's oil profits. Highly-paid politicians are seen as major culprits. In the past four years, $40 billion has vanished from Nigeria's oil revenue accounts.

Electricity is another major issue for Nigerians, according to CNN's Christian Purefoy. Infrastructure problems mean most Nigerians only have access to a few hours of power a day. Jonathan is campaigning to privatize the country's electricity sector while Buhari wants reform.

Will the election run smoothly?
While many view the outcome as a foregone conclusion, a Jonathan victory risks upsetting Nigeria's delicate ethnic-religious and geographical balance. The candidacy of a Christian from the south challenges Nigeria's traditional northern powerbase and could hurt the ruling party's chances among voters who feel it is the turn of a northern Muslim to take power, says Cunliffe-Jones. Nigeria has had a system of alternating Muslim and Christian presidents since the end of military rule in 1989.

Election observers in Nigeria are optimistic that the vote will be free and fair, and much faith has been placed in Attahiru Jega, the tough-talking new head of the country's Independent National Electoral Commission. If he succeeds in overcoming fears of ballot rigging, says Purefoy, it will help bring stability, security and investment.

But, he says, the People's Democratic Party, which has ruled Nigeria as a one-party state for the past 12 years, has previously overseen corrupt and violent elections to keep itself in power, raising the possibility of trouble.

Cunliffe-Jones says confidence in the electoral process could produce a closer-than-normal result in the vote, which will bring its own problems. "Every election since 1999 has been disputed by the losers and I think you can very confidently predict that that will happen again. That said a majority of Nigerians have, for the first time, a lot of confidence in the head of the electoral commission."

Will the election bring change?
Since the end of military rule, Nigeria's government has yet to deliver on many of its promises to improve the lives of the people. Average life expectancy is 47 years of age, at least 70 percent of the population lives on less than $2 a day. Education, healthcare and infrastructure have all collapsed, and the biggest city Lagos runs on a few hours of electricity a day.

Purefoy says that while a peaceful election will improve Nigeria's international image and encourage foreign investors, it may carry a price tag of debts and favors that will hamper future development.

He adds that the seismic north-to-south power shift that would be brought about by a Jonathan victory could also herald a new era of dramatic upheaval, raising the prospect of four more years of turmoil.

But, says Cunliffe-Jones, Nigeria's successfully installation of four elected governments since the days of military rule is a mark of some progress. "In the early days of civilian rule there was a lot of speculation that there would be another coup. The simple fact that you've now had four successive elections is a positive thing."