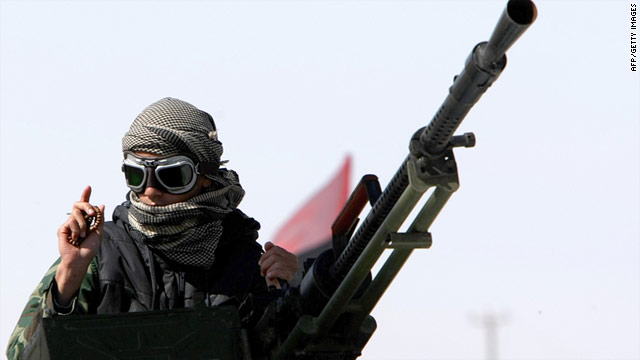 Delegates from Arab and African nations and NATO offered support to Libyan rebels at a summit in Qatar.
STORY HIGHLIGHTS

Tripoli, Libya (CNN) -- Moammar Gadhafi's forces Thursday pounded the strategic port of Misrata, his sole daughter defied the coalition and the three leaders of that alliance declared the Libyan leader "must go and go for good."

At a NATO summit in Berlin, Secretary General Anders Fogh Rasmussen told reporters that NATO has the necessary assets to continue aerial strikes, but the tactical nature of the fight has changed.

"Now they hide their heavy arms in populated areas, where before many targets were easier to get to," Rasmussen said. "To avoid civilian casualties, we need very sophisticated equipment. So, we need a few more precision fighter ground-attack aircraft for air-to-ground missions."

With the conflict at a deadly impasse, Britain and France have been pressuring NATO to step up airstrikes.

Is NATO doing enough in Libya?

"We are convinced that better times lie ahead for the people of LIbya," they wrote. They likened the fighting in Misrata to a "medieval siege."

The White House released text of the opinion piece, which called on the Libyan troops to return to their barracks.

"Our duty and our mandate under U.N. Security Council Resolution 1973 is to protect civilians, and we are doing that. It is not to remove (Gadhafi) by force. But it is impossible to imagine a future for Libya with (Gadhafi) in power," the three wrote. "The International Criminal Court is rightly investigating the crimes committed against civilians and the grievous violations of international law. It is unthinkable that someone who has tried to massacre his own people can play a part in their future government."

Gadhafi's daughter, Ayesha, speaking to a cheering crowd in Tripoli, said the United States tried to kill her and other children in 1986.

Ayesha Gadhafi also said rebel forces were being wrongly portrayed. "Who are those civilians that you're trying to protect while killing us? Are they those who hold RPGs and other weapons?"

The emir of Qatar, meanwhile, told CNN "it's possible" weapons provided by his state have reached Libyan rebels in the past two days.

Hamad bin Khalifa told "The Situation Room" that the opposition first must be trained in use of the weapons.

Libyan Deputy Foreign Minister Khaled Kaim accused Qatar late Wednesday of providing rebels in eastern Libya with anti-tank warheads, but he did not say when.

A week ago, a CNN team in eastern Libya saw the rebels with anti-tank missiles, which they didn't have before.

Rebels near Ajdabiya were beginning to show signs of discipline and have received new equipment, CNN's Ben Wedeman reported. Despite the enhanced organization, they were not ready to take the offensive.

In Misrata, at least 23 people were killed and more than 100 were wounded in the dawn attack at the port and a nearby residential area, said the director of one of the four clinics open in the city.

The attacks Thursday destroyed a cement factory and cargo containers at the Misrata port, where a medical aid ship was expected to dock, residents said.

"If people do not die here from shelling, they will die from starving since Gadhafi is preventing aid from arriving to the port," said Mohammed, a medical assistant.

He said the shelled port had reopened and did not sustain major damage.

Misrata residents interviewed by CNN did not want to be identified because of security reasons.

CNN could not independently verify the reports but the International Organization for Migration said it chartered an 800-person-capacity boat to evacuate at least 6,000 stranded migrant workers in Misrata, many of whom have been living in warehouses with little food and a lot of fear.

The organization said the boat was carrying hundreds of tons of medical aid to Misrata and was en route to the port.

"From reports on the ground, this rescue mission cannot come soon enough," an IOM worker on the boat said in a news release. "It is going to be heartbreaking not being able to take everyone out at once."

Misrata has been under siege for weeks. Reports of civilian casualties streamed in Tuesday and Wednesday.

U.N. Secretary-General Ban Ki-moon said that in addition to Misrata, the situation also is particularly grave in the cities of Zintan and al-Brega because of critical food and water shortages. Rebels have pushed back the battle lines in the east from the war-weary city of Ajdabiya toward al-Brega.

"We are also deeply concerned with the fate of third-country nationals who are trapped in the areas of fighting," Ban said at an Arab League meeting on Libya in Cairo. "As the fighting rages, the situation will only get worse and the more distant a political solution."

International delegates attending a meeting on Libya Thursday in Qatar again urged Gadhafi to step down immediately. But the Libyan strongman has shown no signs of backing down.

State-run television aired video Thursday of Gadhafi hanging out of the sunroof of a sport utility vehicle and waving to other cars and people on the streets.