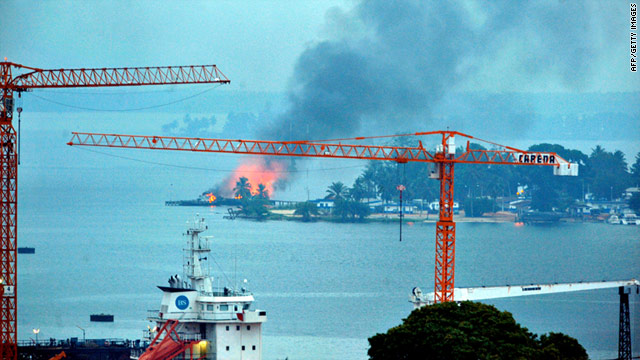 A fire is seen at a naval base controlled by forces loyal to strongman Laurent Gbagbo in Abidjan, Ivory Coast, on Sunday.
STORY HIGHLIGHTS

Choi Young-jin, head of the U.N. mission in the country, said pro-Gbagbo forces were shelling the Golf Hotel in Abidjan, where the country's internationally recognized president Alassane Ouattara is staying, and "today they began to shell our quarters" -- the section of the hotel in which the U.N. forces are headquartered -- as well. "So we decided we cannot pass this moment without action," Choi said.

Together with the French military, U.N. forces targeted key positions. Choi said there were "several camps" belonging to the Gbagbo loyalists. "We are taking them out."

U.N. Secretary-General Ban Ki-moon said he ordered the military operation Sunday "to prevent the use of heavy weapons which threaten the civilian population of Abidjan and our peacekeepers."

The U.N. mission does not extend to extracting Gbagbo from his residence, Choi said. It would be up to pro-Ouattara forces to oust Gbagbo, he said.

Ban renewed his call for Gbagbo "to step aside immediately."

"Civilians are bearing the brunt of the violence," the secretary-general said. "The fighting must stop. Mr. Gbagbo needs to step aside immediately."

Gbagbo's forces had attacked the Golf Hotel Saturday as well. U.N. forces fired back at the time, said Hamadoun Toure, spokesman for the U.N. mission in Ivory Coast. "We stand ready to protect the Golf Hotel, as we have a mandate," he told CNN.

As Gbagbo has refused to cede power, the political stalemate has plunged the West African nation into crisis.

Gbagbo's forces used a lull in fighting last week as a "trick" to reinforce their positions around the Abidjan, according to Alain Le Roy, the head of United Nations peacekeeping operations.

They said Tuesday they wanted a peaceful solution to the months-long fighting, but soon resumed shelling both the U.N. headquarters and the civilian population, Le Roy told reporters at the United Nations.