By Nick Thompson for CNN 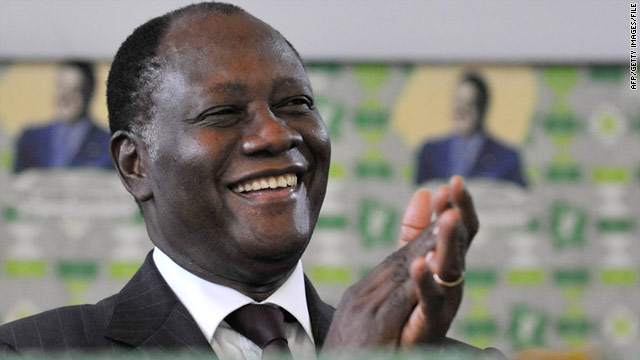 Many hope that "Ado," as Alassane Ouattara is referred to by supporters, can reunify a country torn apart by civil war in 2002.
STORY HIGHLIGHTS

(CNN) -- The man recognized by the international community to be Ivory Coast's rightful president is no stranger to the frustrations of winning his country's top job.

Alassane Dramane Ouattara was twice rejected from running for the presidency of the West African country because he was viewed as a foreigner. His mother was from Burkina Faso.

When he finally appeared to have won the election in 2010 -- after the constitutional stipulation that both a candidate's parents need to be Ivorian was overturned -- his bid was again thwarted, this time by defiant incumbent and longtime rival Laurent Gbagbo.

Gbagbo's party contested the result and accused "foreigner" Ouattara and former colonial power France of colluding with the United Nations to overthrow him to further its own interests in a country divided by a civil war in 2002.

Born in what was French West Africa in 1942, Ouattara began his career as an economist, having studied in the United States at the University of Pennsylvania before taking a job at the International Monetary Fund in Washington in 1968. Meantime, the Ivory Coast declared independence from France in 1960.

After a number of roles at the IMF, including the directorship of the African Department, he was appointed governor of the Central Bank of West African States.

In 1990, Ivorian founding president Felix Houphouet-Boigny made Ouattara his prime minister, counting on Ouattara to implement reforms to return the country to economic prominence in West Africa.

When Houphouet-Boigny died in 1993, Ouattara became acting president until he was edged out without an election by Henri Konan Bedie. He resigned his premiership and returned to work for the IMF, this time as the organization's deputy managing director.

In 1995, Ouattara was chosen as the presidential candidate for the Rally of the Republicans opposition party, but was disqualified by a divisive birthright policy banning any candidate who had a foreign parent, a law critics within the country believe was created specifically to exclude Ouattara.

A coup in 1999 led by Robert Guei, a former general in the Houphouet-Boigny government with presidential aspirations, ushered in a military government that pledged to curb alleged corruption and led Ouattara to re-enter the political fray.

Ouattara was once again chosen as the Rally of the Republicans presidential candidate. He continues to lead the party. His exclusion from the 2000 ballot on the birthright issue led him to call for his supporters to boycott the election, in which Laurent Gbagbo won the presidency.

In the past decade Gbagbo has continuously highlighted the difference between himself and Ouattara, using state media in a concerted effort to paint his main rival as an unpatriotic outsider controlled by the west.

"Ado," as Ouattara is fondly referred to by supporters, is a Muslim who draws the majority of his political support from northern Ivory Coast, while Gbagbo is a Christian from the south, where the nation's traditional positions of wealth and power lie.

The two men have a longstanding rivalry, and Gbagbo still blames Ouattara for the unofficial division of Ivory Coast nearly 10 years ago.

While he denies involvement in the coup, the majority of the forces now supporting Ouattara are the same rebels who seized the northern half of the country nine years ago -- and one of the rebel leaders, Guillaume Soro, is the president-elect's prime minister in his newly formed government.

While the EU, U.N. Security Council and African Union have all endorsed Ouattara as the winner of the 2010 presidential election, an announcement on the website of Notre Voie, loyal to the Gbagbo regime, still reports that Gbagbo netted 51.45% of the vote to Ouattara's 48.55%.

Many hoped the long-awaited presidential election would finally reunify a country torn apart by civil war, but the fallout from the contested poll and subsequent skirmishes between Gbagbo and Ouattara forces have only served to further destabilize Ivory Coast.

Despite enjoying widespread support in a rebel-held north dominated by Muslim immigrants, Ouattara's rivals in the south point to his Western education and years spent abroad working for the IMF as proof that he is not a "true Ivorian."

This week, a Gbagbo adviser placed the blame on foreign powers such as France and the United States for recognizing Ouattara as president of Ivory Coast.

"For 30 years there was no trouble in the country," Abdon Bayeto said, adding that Ouattara knows he lost the election.

While observers hope that Ouattara's successful stints at the IMF will translate into a promising economic future for Ivory Coast, he has yet to show a break from the past when it comes to his use of military troops.

Although the West views Ouattara as a more palatable option than Gbagbo -- he has been endorsed by U.S. President Barack Obama, France's Nicolas Sarkozy, and the U.N. Security Council -- Ouattara may still have to answer to U.N. charges that his troops shot hundreds of people to death in the western town of Duekoue in late March.

In the end, the West may have to deal with a man whose economic ideals fall very much into a Western template, but whose failure to control violence carried out in his name will remind many of some less-favored West African leaders.

In his 20 years in politics, Ouattara has gone from prime minister to opposition candidate to presumed president-elect. After finally having power he has sought for so long, what could be his toughest battle appears to lie in the weeks and months ahead.