Ex-U.S. congressman Weldon says he will meet with Gadhafi 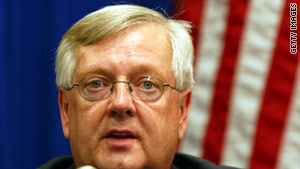 "It will be very hard to simply bomb [Gadhafi] into submission," Curt Weldon wrote in the opinion piece.
STORY HIGHLIGHTS

Tripoli, Libya (CNN) -- Former U.S. Rep. Curt Weldon said he is set to meet with Moammar Gadhafi on Wednesday in an attempt to persuade Libya's embattled ruler to step down.

Weldon will also meet with Libyan Deputy Foreign Minister Khalid Khaim, the Republican from Pennsylvania said in an interview with CNN affiliate WPIX-TV.

Weldon said that in addition to Gadhafi's resignation, he is proposing a cease-fire on both sides; a withdrawal of government forces from key cities; no further advances by rebel forces; a joint interim government run by Libya's current prime minister and the an opposition leader; unfettered humanitarian access; and the establishment of a parliamentary commission that would include American, Middle Eastern, European and African politicians helping to establish a new parliament in Libya.

As far as the Gadhafi family, Weldon's proposals also suggest a possible title for Gadhafi as honorary chairman of the African Union and allowing his second-oldest son, Saif, to stand in elections.

Saif al-Islam Gadhafi was once thought of as a leading reformer in the Libyan government, but the 38-year-old has become one of his father's most outspoken defenders since the start of the unrest.

In an opinion piece written for The New York Times, Weldon said, "I've met (Moammar Gadhafi) enough times to know that it will be very hard to simply bomb him into submission." He said he was in Libya at the invitation of Gadhafi and that U.S. President Barack Obama's administration is aware of the trip.

CNN did not immediately get a response late Tuesday night from the U.S. State Department or the White House about Weldon's trip.

In 2004, Weldon led a congressional delegation to Tripoli and met privately with Gadhafi after the Libyan leader renounced terrorism in an effort to establish warmer ties with the West. Weldon said in his opinion piece Wednesday that he traveled in 2004 to support Gadhafi's decision to give up Libya's nuclear weapons program, though neither he nor the White House wanted to support Gadhafi himself.

Weldon told CNN in 2004 that he had 14 meetings with "everyone in the administration" and toured a nuclear complex.

Weldon's proposal also suggests free elections within 12 months overseen by the United Nations, according to reporter Larry Mendte of WPIX-TV who traveled with Weldon to Libya.

CNN's Nic Robertson in Tripoli contributed to this report