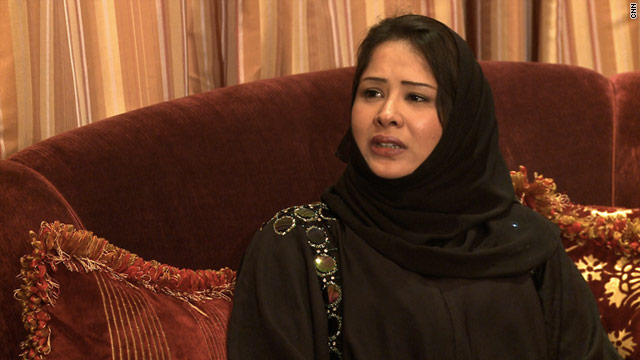 Tripoli, Libya (CNN) -- Eman al-Obeidy, the woman who says forces loyal to Libyan leader Moammar Gadhafi raped her, is grateful for support she has received, said CNN's Nic Robertson, who met briefly with her Wednesday.

"She is a very strong lady who told me to thank all (the) people who have stopped her case from disappearing," Robertson said.

Al-Obeidy said she had a message for humanitarian organizations: They should come to Tripoli and "see how life is here," he said.

She said she is still recovering physically from the alleged assault and displayed faded bruises and rope burn marks on her wrists, Robertson said. But, she told him, she is unable to leave Tripoli and be reunited with her family and faces abuse whenever she leaves her house, he said.

The Libyan government is insisting on a review of the interview by a government representative before transmission. The review was scheduled Wednesday night, but an apparently imminent airstrike postponed the review until Thursday morning.

Meanwhile, al-Obeidy's mother said Wednesday that talking to her daughter by telephone Tuesday night was an emotional experience.

The two women spoke on Tuesday. Al-Obeidy told her mother that a court employee pulled a weapon on her when she went to a courthouse.

The 29-year-old law school graduate burst into a Tripoli hotel last month to tell her story to journalists. Authorities rushed her away from the hotel, but she is no longer in custody. Still, she told CNN's "AC360" Tuesday she fears for her safety in Tripoli, which she called a "large prison." She said authorities had taken her passport and were not letting her cross into Tunisia.

Al-Obeidy said she spent 72 hours under interrogation after being dragged away from the Tripoli hotel where she tried to tell journalists about her alleged abuse. She has said the public statements from a state TV anchor and government officials, who initially called her mentally ill, drunk and a prostitute, have ruined her reputation.

Ahmad, who lives in the eastern Libyan city of Tobruk, said her daughter told her in the call "she was trapped. She said, 'They're taking me back and forth, interrogating me, hitting me.' She said, 'They want to kill me. Help me, come and get me,' she said. 'Where are the human rights groups?' "

Asked how she is coping, Ahmad said, "Our hope in God is very strong."

She told her daughter Tuesday that the world is praying for her and not to be afraid.

All eyes on Eman al-Obeidy

On whether she has a message for those who might be listening, Ahmad said, "I want [President] Obama and all the Western world to get involved and bring me back my daughter. Just bring her back to me. I would like to tell the mothers all over the world, and the Arab world, that if something happens to someone, they need to speak out. They just need to speak out."

Al-Obeidy burst into the Rixos Hotel in Tripoli on March 26 while international journalists staying there were having breakfast. She told reporters she had been taken from a checkpoint east of Tripoli, held against her will for two days and was beaten and raped by 15 men.

When CNN saw her in March, al-Obeidy's legs and face were bruised and she had blood on her right inner thigh. Her visible injuries appeared to support her allegations.

When rape is a tool of war

"It's very difficult for women in Libyan society to report that they have been raped because of the shame and fear they feel, and it has been even more difficult for al-Obeidy," Khalife said. "But she has courageously ignored all these barriers to tell her story to the world."