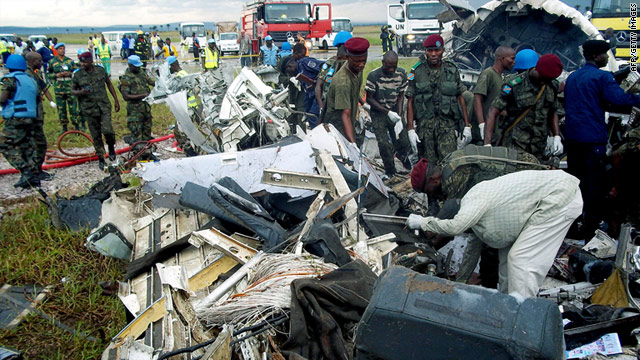 Soldiers and officials inspect the wreckage of a UN plane after it crashed as it tried to land in a storm in Kinshasa on Monday.
STORY HIGHLIGHTS
RELATED TOPICS

(CNN) -- One person survived the crash of a U.N. plane that killed 32 others in the Congo on Monday, U.N. spokesman Farhan Haq said.

The aircraft, which carried 33 people, belonged to MONUSCO, the U.N. mission in the Democratic Republic of Congo, according to a Congo Transportation Ministry official.

The plane crashed early Monday afternoon while attempting to land at the Kinshasa airport after a flight from Goma in the eastern part of the vast nation in central Africa, the official said.

The Kinshasa airport reported strong thunderstorms and sustained winds of 37 kph (23 mph) at the time.

U.N. Peacekeeping Director Alain Le Roy said the aircraft missed the airstrip likely because of the wind, but he cautioned the investigation was in its early stages.

Most of those on board were U.N. personnel; five worked for other agencies, Le Roy told reporters.

Susan Rice, the U.S. ambassador to the United Nations, said America "stands ready to assist the U.N. in the aftermath of this terrible accident."

"As we know well, a stable and prosperous future for the DRC must begin with peace for its people, and U.N. personnel have worked courageously to strengthen the protection of the nation's women, men and children after years of strife," Rice said.