Concerns raised about NATO capabilities as U.S. pulls back from Libya 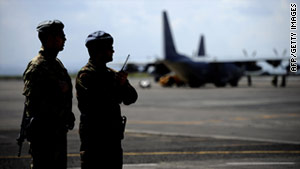 Italian soldiers overlook a C-130, one of the aircraft types in high demand in the Libya mission.
STORY HIGHLIGHTS

Washington (CNN) -- The NATO request for the United States to continue flying its planes capable of striking at Libyan troops on the ground has raised concern that coalition forces do not have the military equipment needed for the type of strikes necessary to continue degrading Libya's military.

The United States was expected to stop flying its A-10s and AC-130s this weekend as NATO took over leadership of the entire mission. The planes are equipped to fly lower and slower than fighter jets, which improves accuracy in targeting of troops and tanks that are in and around cities.

Days of bad weather in Libya hampered visibility and the ability of coalition planes to strike at advancing Libyan troops with as little risk to civilians as possible, and NATO asked the United States extend flying the specialized planes through Monday, according to Oana Lungescu, a NATO spokeswoman.

Learn more about the 'unique resources' provided by the United States

But a NATO official said that, weather aside, only the United States has the ability from the air to strike at mobile troops and equipment.

NATO needed that from the United States, the NATO official said.

"Specifically the A10s and the AC-130s nobody else but the U.S. has," the official noted.

The transition from U.S. command to NATO command, and the subsequent halt to flights of U.S. fighter jets over Libya, was not supposed to lessen the coalition capabilities, U.S. officials had said.

When NATO first announced the agreement to take over the mission, a senior administration official briefing reporters at the State Department insisted that the transition would not hamper the operation.

"It means, in practice, that NATO will conduct the military operation in a way that is very similar to the way the coalition has conducted it up to this point, and no more but also no less," the senior administration official said.

Congress, most notably Republican senators John McCain of Arizona and Lindsey Graham of South Carolina, warned last week that the U.S. decision to stop flying planes like the A10 and AC130 while the Libyan military is still fighting hard was a big mistake.

"The fact is that your timing is exquisite," McCain said at a hearing last week where the secretary of defense and chairman of the Joint Chiefs of Staff were testifying about Libya. "At a time when the Gadhafi forces have literally tragically routed the anti-Gadhafi forces, that's when we announced that the United States is abdicating its leadership role and removing some of the most valuable assets that could be used to great effect against those rebels. "

The Joint Chiefs chairman, Adm. Michael Mullen, insisted that taking the planes out would not lessen the coalition capabilities. The coalition efforts "could be sustained at the necessary levels to support the opposition," he said.

Defense Secretary Robert Gates and Mullen said while the United States was pulling the planes from daily use, they would be on standby in case NATO needed them.

The NATO official said it is "possible" they could keep returning to the battlefield when there is bad weather and NATO calls for them, if Gates approves the use.

The United States is also supplying what officials refer to as "unique capabilities," like surveillance drones, electronic jamming equipment and refueling planes.