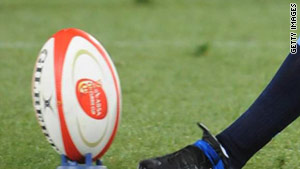 Johannesburg, South Africa (CNN) -- A former South African rugby star who is charged with the murder of three people in Durban on Monday will undergo mental observation, police say.

The man, who played for a top provincial team, the Blue Bulls, allegedly hacked his victims to death with an axe, decapitating one of them. Investigators say his fourth victim escaped and is helping them with their probe.

Media reports claim the player went on a killing rampage after his daughter was raped and infected with HIV. Police, however, say his motive is still under investigation.

The player was nabbed in the early hours of Wednesday morning on South Africa's East Coast. Police allegedly found his bloodied murder weapon in a dog kennel at the home where the arrest took place. Bloodied clothes and a car linked to the crimes have also been found.

Prosecutors have asked that his name not be released before he appears in a lineup. Five witnesses will be asked to identify him before his next court appearance on April 7.

"Our fear is that if his name is released, someone might be able to get hold of his picture on the internet, publish it and then destroy the credibility of our eyewitnesses, who could be accused by the defense of having seen him in the media and not in person," prosecutor Martin Mtambo told CNN.

According to police, there have been over 100 serial killings in South Africa since 1936, with the bulk of them in the mid-1990s. Since 1996 the South African police force has had a specialized unit dealing specifically with psychologically motivated crimes.

This month the Johannesburg high courts handed down 16 life sentences to 42-year-old Jack Mogale, who was found guilty of a year-long murder spree that saw him rape 19 women and kill 16.

Lawyers for the former Blue Bulls player want the court to determine whether their client is fit to stand trial.

The team is no stranger to controversy. One of its stars, Bees Roux, goes on trial for murder in August. He is accused of beating a policeman to death last year. Team manager Ian Schwartz, who is currently in New Zealand, has refused to comment on the latest case.