US providing 'unique capabilities' to the Libya mission 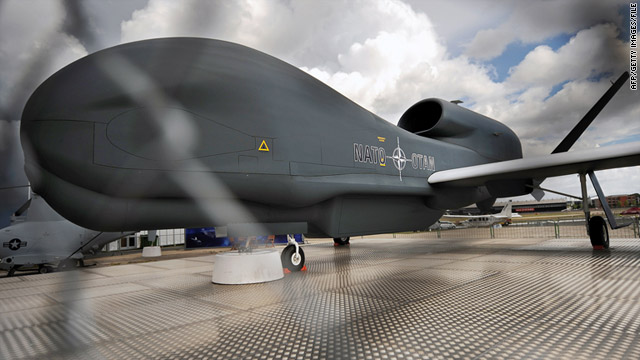 The Global Hawk high-flying unmanned aircraft is just one of the military resources being employed by the U.S. in Libya.
STORY HIGHLIGHTS

Washington (CNN) -- As the United States transfers control of the Libyan operation to NATO, officials say the American military will continue to be a part of the effort.

Since the operation began more than a week ago, the United States' "unique capabilities" have been referred to time and time again by U.S. officials, from the president to Secretary of State Hillary Clinton to Secretary of Defense Robert Gates. But what exactly does that mean? The U.S. has military tools that other coalition and NATO countries do not, or do not have as much of, including surveillance and communication jamming capabilities that are major keys to any successful operation or war.

"The United States buys as much high-tech military equipment as all the rest of the world combined," says national security and weapons expert Loren Thompson of the Lexington Institute. "Because of that, there are things that we can do that our allies can't do, like jamming radars, and collecting intelligence."

Without these capabilities the coalition would have thought twice about the operation, Thompson says.

Weighing in on Obama's speech

"Our European allies would be reluctant to take on military combat in Libya unless they had support from the U.S. because there are so many advanced military systems that they do not have themselves," he says.

The U.S. role however, will not be at the forefront just because of the high-tech weaponry, says defense expert John Pike of GlobalSecurity.org.

"It will be more of a supporting role than a pointy end of the spear role," said Pike. "Most of these unique capabilities are support."

At a Pentagon briefing Monday, U.S. Navy Vice Adm. Bill Gortney described the U.S. role in Libya by saying, "Maybe we aren't flying the bulk of combat sorties any more, but the U.S. is now providing nearly 80% of all air refueling, almost 75% of aerial surveillance hours and 100% of all electronic warfare missions."

Here's a partial list of what is being used by the United States in the Libya mission, based on Defense Department information, Jane's defense publications and various analysts:

--The Global Hawk: A high-flying, unmanned aircraft that provides intelligence, surveillance and reconnaissance. Its very long endurance allows it to stay in flight longer than any manned and unmanned aircraft. The Global Hawk collects pictures and video of the ground and some versions have the ability of electronic eaves dropping. This allows the aircraft to see the location of Libyan troops and activity at their various military sites. It is also helpful in assessing the success of strikes on targets and bomb damage.

--Joint STARS (Joint Surveillance Target Attack Radar System): An intelligence and surveillance aircraft with radar capabilities tucked underneath the plane. Different than the Global Hawk, this aircraft is manned. The radar looks sideways at the ground, allowing it to see moving ground targets, such as Libyan tank movements. The Joint STARS' very sensitive radar system generates its own radio waves, sending them out, and then receiving radar returns, which allows it to create pictures of what is on the ground. Operating with radar waves allows Joint STARS to take pictures at night, without light.

--AWACS (Airborne Warning and Control System): This is a radar aircraft like the Joint STARS, capable of surveillance, but is used for monitoring aircraft such as Libyan planes or helicopters, instead of monitoring ground forces. The radar is a rotating dome on the top of the aircraft. Besides tracking enemy planes, the AWACS also monitors allied aircraft, directing friendly planes to the best location for targeting.

--Maritime Patrol Aircraft, P-3: An older propeller aircraft mostly used to monitor vessels and submarines at sea but it can also track ground targets. Enforcing the arms embargo on Libya is a main task. The aircraft can track electronic emissions like radio waves, allowing the coalition to listen in on enemy radio transmissions. The P-3 is also capable of identifying the types of communication and radar systems the enemy is using by differentiating between the unique electronic signals being sent out.

--EA-18G Growler: An aircraft used to jam radar and other enemy communications and electronic signals. With pods on its wings and under its fuselage, the Growler identifies what kind of emitters the enemy is using for its radar and communication devices. Then it puts out a much stronger signal on the same line, causing the enemy's communication devices or radars to not function properly. The Growler focused on disrupting Libya's air defense radar systems in the beginning of the operation.

--Commando Solo: The aircraft disrupts enemy radio signals, allowing the United States to broadcast its own message on enemy channels. In this operation the U.S. is transmitting messages to Moammar Gadhafi's forces in both Arabic and in English, telling them to stop fighting and leave their weapons. "Although we will not discuss specifics, Commando Solo could be used to transmit information to regime military forces to cease hostilities or broadcast humanitarian relief information to the Libyan public, such as where people can get basic food and water supplies," the Pentagon says.

--Compass Call: The aircraft disrupts the enemy's command and control communications with electronic jamming. Operated by the Air Force. While a similar capability to the Growler, the Compass Call is mostly focused on taking out the Libyan forces' communications. This jamming ability causes the Libyan commanders to not be able to communicate with their forces in the field.