Gadhafi's son was on U.S. internship until crisis 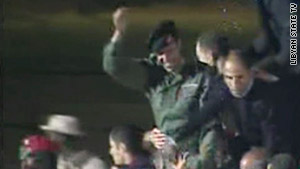 Washington (CNN) -- Libyan leader Moammar Gadhafi's youngest son, who runs the country's elite special forces for his father's regime, was on an internship program in the United States when public unrest exploded in Libya last month.

Khamis Gadhafi abruptly cut off his visit and returned to Libya, where he has led the 32nd Reinforced Brigade, known at the Khamis Brigade, in its brutal suppression of rebel forces.

The brigade's headquarters was the target of six Tomahawk missiles overnight, according to Vice Adm. William Gortney of the Joint Chiefs of Staff. Gortney described the brigade as "one of the most active in terms of attacking innocent people."

Libya's state TV on Monday night broadcast live footage from Gadhafi's Tripoli compound of Khamis Gadhafi dressed in uniform and greeting people. Prior to the broadcast there had been unconfirmed reports that the younger Gadhafi had died from injuries he suffered when a plane flown by a disgruntled Libyan pilot crashed into a military compound while he was there.

ABC News was the first to report Khamis Gadhafi's recent stay in the United States.

The month-long internship was sponsored by AECOM, a global engineering and design company based in Los Angeles, and with the assistance of the State Department.

AECOM has business dealings with Libya.

Khamis Gadhafi left the United States for Libya on February 17.

Paul Gennaro, the senior vice president and chief communications officer for AECOM, issued a statement saying, "The educational internship, which consisted of publicly available information, was aligned with our efforts to improve quality of life, specifically in Libya, where we were advancing public infrastructure such as access to clean water; quality housing; safe and efficient roads and bridges; reliable and affordable energy; and related projects that create jobs and opportunity."

Gennaro said the company was "shocked and outraged" to learn of Khamis Gadhafi's role in the Libyan crisis. "We were aware of the student's family relationship, but we were not informed of any military connection whatsoever," Gennaro said. It was the company's understanding that Khamis Gadhafi was an MBA student from an accredited university in Spain. "The student was positioned to help oversee improvements in Libya's quality of life and infrastructure initiatives, which the country had been advancing since 2007," he said. The U.S. State Department was aware of and approved all the meetings, Gennaro said.

According to Gennaro, AECOM did not provide any funding for either Khamis Gadhafi or the internship program.

Since 2008, AECOM has been involved in a multibillion-dollar initiative with Libya to modernize the country's infrastructure. The company withdrew all its expatriate employees and their families from Libya earlier this month. The joint project to train Libyan engineers to build and maintain homes, roads and water systems is on hold.