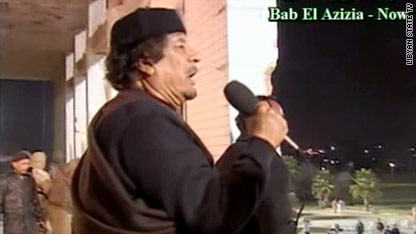 Tripoli, Libya (CNN) -- As Libyan leader Moammar Gadhafi crowed, "I do not scare," the United States Tuesday got back two crew members whose F-15E fighter jet malfunctioned and said it will be able to hand over command of the coalition that has hammered loyalist military positions over four days.

Meanwhile, fighting raged in Misrata, east of the capital, where a witness claimed Gadhafi has placed snipers on the tops of buildings.

Also Tuesday, the commander of U.S. Naval forces in Europe and Africa said multinational air strikes would continue until Gadhafi complies with a United Nations mandate to stop attacking civilians.

Americans "are going to be satisfied that lives were saved" by the U.S. military action, President Barack Obama said during a visit to El Salvador. He said the timetable for a transition of military leadership will be coming in days, rather than weeks.

Gadhafi vowed Tuesday to emerge victorious in his battle with international forces seeking to impose a no-fly zone in his country and to halt his forces from attacking civilians.

"We will not give up," he said to a crowd of supporters, many of them waving green flags in a speech broadcast on state television. "They will not terrorize us. We are making fun of their rockets. The Libyans are laughing at these rockets. We will defeat them by any method."

He said Libyans "are leading the international war against imperialism, against despots and I tell you, I do not scare."

Locklear also spoke about the U.S. F-15E Strike Eagle that had flown from Aviano air base in Italy to Libya, where the fighter experienced mechanical problems. Both the pilot and the weapons officer ejected and were rescued within hours -- one retrieved by the U.S. military, the other by anti-Gadhafi Libyans.

The aviators, who suffered minor injuries when they landed, were both out of Libya and in U.S. hands, Locklear said.

The U.S. military dispatched a pair of Osprey tilt-rotor aircraft from the amphibious assault ship USS Kearsarge, about 100 miles off the coast of Libya, to rescue the downed aviators, said Capt. Richard Ulsh, spokesman for the 26th Marine Expeditionary Unit.

But the two men landed in different places when they parachuted, and the U.S. rescue crew was able to pick up only the pilot. He was flown to the Kearsarge, which has extensive medical facilities.

Libyan rebels recovered the second crew member and treated him with "respect and dignity" until coalition forces were able to reach him, Locklear said.

Residents in the area, some of whom witnessed the crash, told CNN they combed farmlands to search for the two Americans. They also expressed their gratitude to coalition members for the United Nations-authorized coalition attack on Libyan air defense targets meant to protect civilians.

"The recovery mission from my perspective was executed as I would have expected it to be given the circumstances," he said.

Criticism and questions persist about the Libyan campaign, with no clear answer on who will take over command of the military operation and what the endgame or exit strategy will be. But U.S. officials said the international mission has succeeded in halting Gadhafi's momentum.

Locklear told reporters that initial military strikes by the French, followed by attacks by Britain and the United States, have rendered Gadhafi's long-range air defenses and his air force largely ineffective. And the Libyan opposition's newly formed administration urged the international community to continue enforcing the U.N. charter.

"The interim national council has called on the international community to take all forceful deterrent measures, based on the U.N. charter and international covenants, to help the Libyan people put an end to further crimes against the humanity," the statement from the Transitional National Council said.

Missiles rained down Tuesday and anti-aircraft fire pierced the night sky in Tripoli hours before dawn.

The Libyan government took international journalists to a port area that appeared to have been damaged by missile strikes that left craters 15 feet deep. A destroyed mobile rocket launcher system lay smoldering. Several warehouses were hit.

The United States fired 20 Tomahawk cruise missiles into Libya during a 12-hour period, said military spokeswoman Cmdr. Monica Rousselow. A total of 162 Tomahawks have been fired by the United States and Britain since the start Saturday of Operation Odyssey Dawn, which includes enforcement of a no-fly zone. The operation has included 212 U.S. and 124 sorties.

The international operation has targeted air defense sites and command centers, but Gadhafi himself has not been targeted, and there are no plans to kill the leader, said Gen. Carter Ham, the head of U.S. forces in Africa.

"I could see accomplishing the military mission, which has been assigned to me, and the current leader would remain the current leader," he said. "We think we have been very effective in degrading his ability to control his regime forces."

Ham said no Libyan aircraft have been observed flying since the military operations began Saturday. And air attacks have stopped Libyan ground forces from approaching the eastern rebel stronghold of Benghazi.

But fighting raged in Misrata, a city under siege two hours east of Tripoli.

Four children in the same family were among 13 civilians killed in Misrata fighting Tuesday, said Dr. Khaled Mansouri of Misrata Central Hospital. About 30 people were injured, he told CNN.

The death toll from the clashes between Gadhafi forces and rebels in the city stands at 90 over the last five days.

An opposition spokesman who would give only his first name, Mohamed, told CNN the situation in the city is dire and worsening by the hour as Gadhafi forces have taken control of the main street that leads from the city center to a highway that connects Misrata to Tripoli.

Loyalist snipers are on the top of buildings, he said.

The hospital is running out of medical supplies and are turning patients away, he said. "I have seen a man whose broken arm is hanging being discharged because of lack of space," said Mohamed, who said he would not divulge his full name because of concern for his safety. He said the city has been without water and electricity for nine days.

Violence has raged in Libya following protests calling for democracy and demanding an end to Gadhafi's almost 42-year rule. Protesters have been met by force from the Gadhafi regime, and numerous world leaders -- including U.N. Secretary-General Ban Ki-moon -- have denounced the killings of civilians by Gadhafi's troops.

The U.N. Security Council passed a resolution Thursday that allows member states "to take all necessary measures to protect civilians under threat of attack in the country ... while excluding a foreign occupation force of any form on any part of Libyan territory." It also imposed a no-fly zone.

Barak Barfi, a research fellow with the New America Foundation, said "it's certainly clear" that the allied coalition has stymied the onslaught of Gadhafi troops against rebels in eastern Libya.

"Before the decision in the U.N. was taken Thursday, it seemed like Gadhafi was going to overrun the opposition in a matter of days," he said.

But "it's unclear if the rebels can form under any type of organized command and move forward now that the airstrikes have taken away Gadhafi's offensive capabilities," Barfi said Tuesday. "It's unclear at this point in time who would take control after Gadhafi leaves. We know that there are really no state institutions in Libya."

A former Gadhafi aide told CNN Tuesday that the Libyan strongman would not go down easily.

Abubaker Saad said Gadhafi has several bunkers deep underground and is likely hiding in one of them.

"As you probably all have noticed that now he is giving all of his statements by phone to the Libyan television," Saad said.

There has been intense debate among the allies over NATO's role going forward.

The natural choice to coordinate "Operation Odyssey Dawn" would seem to be NATO with its experience leading and coordinating international coalitions, but U.S. and European officials tell CNN that some allies, especially French President Nicolas Sarkozy, are concerned the action in Libya could be perceived negatively as another NATO operation in another Arab country.

Another complication is how to consolidate Arab support. The United States expects additional Arab support for the coalition enforcing the no-fly zone over Libya, a senior administration official told reporters Tuesday.

So far, Qatar is the only Arab country that has contributed planes to mission.

The official said that several Arab states are in the process of finalizing their plans, adding the Obama administration was "confident we will have further concrete contributions of different kinds" for enforcement of the resolution in the next two to three days.