N.Y. Times journalists arrive in Tunisia after being freed in Libya 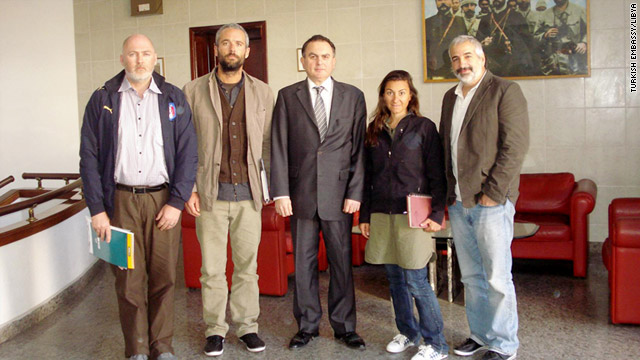 New York (CNN) -- Four New York Times journalists who were reported captured by pro-government forces in Libya last week have been released and have arrived safely in Tunisia, Executive Editor Bill Keller said Monday in an e-mail obtained by CNN.

"We're particularly indebted to the Government of Turkey, which intervened on our behalf to oversee the release of our journalists and bring them to Tunisia," Keller said in the e-mail, which was sent to New York Times staff. "We were also assisted throughout the week by diplomats from the United States and United Kingdom."

The newspaper identified the journalists as Anthony Shadid, its bureau chief in Beirut, Lebanon, and a two-time Pulitzer winner for foreign reporting; Stephen Farrell, a reporter and videographer who was kidnapped by the Taliban and rescued by British commandos in 2009; Tyler Hicks, a staffer who is based in Istanbul and has served as an embedded journalist in Afghanistan; and photographer Lynsey Addario, who has covered the Middle East and Africa.

In a statement Monday, the newspaper said: "We are grateful that our journalists have been released, and we are working to reunite them with their families. We have been told they are in good health and are in the process of confirming that. We thank the Turkish, British, and U.S. governments for their assistance in the release. We also appreciate the efforts of those in the Libyan government who helped secure the release this morning."

The four journalists entered the rebel-controlled eastern region of Libya via the Egyptian border without visas to cover the civil war in the country, the Times said. They had been missing since Tuesday, according to the Times, but Keller said in his e-mail that the four "were allowed to speak to their families by phone Thursday night" and that the government had informed the newpaper Thursday afternoon that they would be freed.

"Because of the volatile situation in Libya, we've kept our enthusiasm and comments in check until they were out of the country," Keller wrote, "but now feels like a moment for celebration. And before long we'll all know the details of their experience."

CNN's Talia Kayali and Marina Landis contributed to this report.