An inside look at Gadhafi's Tripoli compound 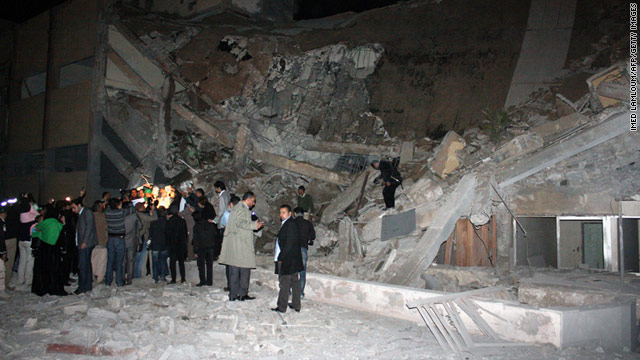 People stand near the rubble after a missile destroyed an administrative building of Moammar Gadhafi's residence in Tripoli on Sunday.
STORY HIGHLIGHTS

Washington (CNN) -- When coalition missiles slammed into a suspected command and control building on a sprawling military complex on the outskirts of Tripoli on Sunday, they were hitting within an area considered to be Libyan leader Moammar Gadhafi's main headquarters and official residence.

The compound is one of what U.S. intelligence believes are approximately two dozen residences Gadhafi has around the country, mostly in the west. Not all are believed to be as elaborate and vast as the Tripoli one.

The Bab el-Azizia compound is the site where official foreign delegations usually meet with Gadhafi, oftentimes in his elaborate tent.

CNN commentator Frances Fragos Townsend had what she called an "absolutely bizarre experience" meeting there with the eccentric Libya leader in the summer of 2007 when she served as President George W. Bush's chief counterterrorism advisor.

From the get-go, Townsend discovered this was going to be a unique experience. She was required to ride to the compound in a car sent by Gadhafi. The Libyans tried to separate her from her U.S. security detail, but she says one agent was able to jump into the car before it departed.

The compound is in the southern suburbs of Tripoli, close to key government buildings and also near a direct highway to the main airport.

The heavily guarded facility is approximately two square miles in size. Gen. Carter Ham, the head of U.S. Africa Command, described it as "a pretty big place with lots of different buildings and facilities inside the compound" and "air defense on the perimeter."

What if Gadhafi stays in power?

After passing through the main checkpoint off the road, Townsend said there were multiple other checks throughout the facility. As they drove through the facility, she saw what appeared to be a mosque, as well as mostly two- to three-story-high residential and office buildings. She passed by uniformed soldiers, tanks, gun systems and other weapons.

The driver stopped in front of the bombed-out remains from the U.S. retaliation for the Libyan-linked terrorist attack on a Berlin disco in 1986. One of Gadhafi's daughters was said to have been killed in the U.S. bombing of the house on the compound. Townsend said Gadhafi had made it "like a war memorial, a monument, a symbol of defiance of American power."

Townsend was then taken to what she called a receiving building, where she waited for several hours in one of the many spacious rooms decorated in traditional Arab fashion with couches lining the perimeter.

She was then driven to a field of knee-high grass, which they had to traipse through on foot to get to the elaborate tent where Gadhafi was waiting to meet her.

Uniformed guards with guns stood outside the tent, with armed plainclothes security inside.

The Bedouin-style tent had an opening on one side, a roof and sides made of heavy textile and was filled with numerous rugs and couches.

Townsend felt Gadhafi clearly intended to intimidate her. He immediately made reference to her Greek heritage and let her know he had done research on her -- he knew her background. "It's all about thuggery there," said Townsend. "They are sending the message, 'We know who you are.' "

Overall, Townsend called it "an absolutely bizarre experience ... like a bad movie."