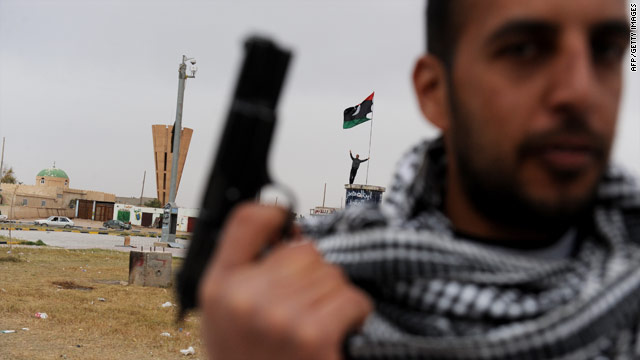 Ajdabiya, Libya (CNN) -- Libyan leader Moammar Gadhafi's forces battled rebels for the cities of Misrata and Ajdabiya on Wednesday, according to witnesses and CNN staff on the ground.

In Ajdabiya, airstrikes, heavy bombardment and fighting between the rebels and pro-Gadhafi forces began after the rebels were able to take control of some positions in the eastern Libyan city overnight.

Thousands of government forces eventually gathered outside Ajdabiya with dozens of heavy artillery pieces, radar control weapons systems and about a dozen tanks, CNN's Nic Robertson reported from just outside the city.

AK-47s and Katyusha rockets were among the weapons carried by government soldiers, who appeared jubilant and confident about a possible upcoming battle for the rebel stronghold of Benghazi.

Gadhafi forces move in on opposition

The troops were carried in white pickups, many of which were covered in dirt for camouflage purposes.

Witnesses said pro-Gadhafi snipers were positioned in various parts of the city.

In Misrata, west of Ajdabiya, Gadhafi "is bombing his way into the city," witness Mohamed Ali said. "He doesn't care if all the people (there) are dead by the end of the day."

"People are not safe. It's amazing that this is happening," Ali said, adding that two people have been killed and 15 injured, one "very critically."

He said Gadhafi's forces had not yet been able to get into the city.

Ali described described himself as a 46-year-old IT engineer and a member of the local opposition council. He called himself a rebel fighter but said he had no weapons.

The rebels are fighting with whatever arms they can capture from government troops, he said, such as Kalashnikov rifles.

"The best we have" is rocket-propelled grenade launchers, he said.

CNN journalists in Libya were not able to reach Misrata to confirm Ali's account. But a second witness also said the city came under sustained attack by forces loyal to Gadhafi on Wednesday.

The tank and artillery fire went on for at least two hours, he said.

"We hear very, very, very loud explosions," said the witness, who did not want to be named. "They have cut off electricity and water."

Meanwhile, four New York Times journalists covering the conflict were reported missing by the newspaper Wednesday. Editors said they had received second-hand information that some of the reporting team "had been swept up by Libyan government forces" in Ajdabiya.

Inside a Libyan rebel training camp

Government forces said they had no information about the missing journalists and said that if they were picked up by the Libyan military, they would have been taken back to Tripoli.

Gadhafi's battles to recapture a number of rebel-held towns and cities come on the day the United Nations Security Council considered imposing a no-fly zone over Libya. Wednesday ended with no agreement on a draft resolution, but several diplomats expressed optimism that a vote would come soon.

The U.S. ambassador to the United Nations said late Wednesday that envoys were considering a variety of options to protect civilians in Libya, not just a no-fly zone or a cease fire. Susan Rice said a "range of actions" were up for serious discussion, including but not limited to a no-fly zone, which has "inherent limitations in terms of protection of civilians."

A diplomatic source told CNN that air strikes are among options being discussed as diplomats focus on what should be in a U.N. Security Council resolution.

The international community is keenly aware of the urgency and gravity of the situation on ground, Rice continued. She said she hopes to see a serious resolution as early as Thursday.

The French Ambassador had earlier confirmed that text for a new draft resolution on Libya had been submitted to diplomats. He also told reporters that he expected a vote on the resolution within 24 hours.

Lebanon's U.N. ambassador, Nawaf Salam, said Arab countries are committed to participating in a no-fly zone. That has been an apparent prerequisite for U.S. support of such a zone.

The Lebanese diplomat wouldn't detail the level of potential Arab participation but said it would be "significant" and said it has "been confirmed by the highest political authorities."

The French foreign minister said on his blog Wednesday that several Arab countries would be willing to participate in a targeted attack on Gadhafi's air assets.

The minister, Alain Juppe, did not specify which countries or how they would participate.

Without implementation of a no-fly zone, rebels fear that it is only a matter of time before there is a bloodbath in Benghazi.

Libya's deputy ambassador to the U.N. expressed this fear Wednesday. Gadhafi "has given instructions for ethnic cleansing," Ibrahim Dabbashi said, adding that the Libyan leader would commit genocide against rebels if he was not stopped by the international community.

Dabbashi made headlines in February when he joined with Libyan Ambassador to the U.N. Mohamed Shalgham to condemn Gadhafi and request that he step down as Libya's leader.

Libya's government has subsequently requested that Dabbashi and Shalgham be denied the right to speak for Libya at the United Nations.

Women marched in Benghazi on Wednesday, carrying banners reading, "how many Libyans must die to get the Security Council to move on."

U.S. Secretary of State Hillary Clinton told reporters Wednesday that opinions in a number of countries initially opposed to the imposition of a no-fly zone shifted after the Arab League announced its support for such a step.

"Intense negotiations" are underway at the Security Council, she said. "We are moving as rapidly as we can to get additional authorization."

A council diplomat said Washington was engaged in negotiations on the text.

China's U.N. ambassador said his country is concerned about deteriorating conditions in Libya but didn't say whether Beijing backs a no-fly measure.

Ali, the opposition leader in Misrata, urged China and Russia to "look in the mirror" and understand that "they are hindering the international effort to put this war criminal in his place."

While the Arab League recommendation of a no-fly zone carried some weight with reluctant council nations, another declaration from the league that there should be "no foreign intervention" has perplexed delegates.

En route to Washington after a weekend trip to Bahrain, U.S. Defense Secretary Robert Gates said Monday that the logistical challenges of enforcing a no-fly zone over Libya could be overcome. "If we are directed to impose a no-fly zone, we have the resources to do it," he said.

"The question is whether it's a wise thing to do. And that's the discussion that's going at a political level."