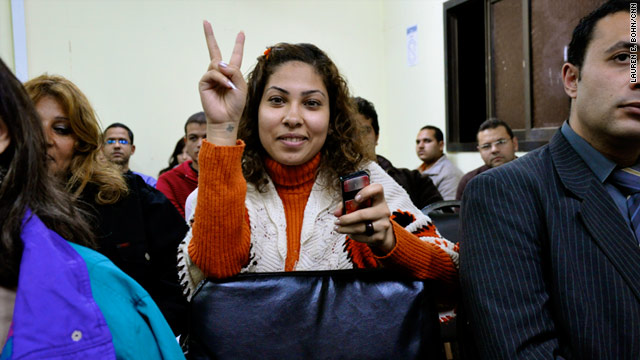 Safee Saad flashes a victory sign and says: "We are ready for our voice to be heard, we are waiting."
STORY HIGHLIGHTS

Cairo, Egypt (CNN) -- Around 50 Egyptians packed into a small, fluorescently lit room in a nondescript building in Cairo, learning the lessons they say will be needed in their new world.

After the euphoria of toppling former President Hosni Mubarak, now many say comes the even harder task of establishing a democratic Egypt.

At the Egyptian Democracy Academy the 'students' armed with notebooks and audio recorders, are learning everything from how to evaluate a political candidate to how to use new media.

"It's like a classroom, which is what we need after 30 years of no teachers and learning," said 33-year-old pharmacist Amr Hafez as he walked into the Egyptian Democracy Academy.

EDA, a non-profit organization, was set up in 2009 by human rights and democracy activists to foster a culture of political participation in Egypt.

Since spring 2010, people have gathered at the academy's Cairo office on Thursday nights for "Liberal Corner" to hear speakers on topics from advocacy training to the role of women in politics.

In the days following monumental protests in Cairo's Tahrir Square that prompted Mubarak's resignation, civic groups like EDA are relishing the historic moment but say the gap between the death of a 30-year regime and the birth of democracy is simply too vast for celebration just yet.

"We discovered that making a revolution is much easier than democracy building," said Basem Fathy, political activist and projects director for EDA. "Democracy is a not a moment or event, it's a continuous practice and process about understanding."

Ali Zakaria, 21-year-old pharmacy student at Cairo University and manager of Elma 7rosa, the EDA's internet radio station, gathered with his friends to discuss the two questions he says are on everyone's mind: "What's next and what should we do?"

"I'm here to talk and listen because I'm still afraid for the future. We made the hard part, but harder part is next. We've never had anything like this before," he said. "I'm 21 and it's the first time to see all this in our country."

The Supreme Council of the Armed Forces, the military council that has ruled Egypt since Mubarak's ouster, has mapped out a timetable for laying the groundwork of a democratic Egypt.

Egypt's military council plans to hold a referendum on reforms to the constitution on March 19 and parliamentary elections in June, followed by a presidential election.

But the EDA says that is too short a time to teach democratic principles and for new groups to build the organizational capacity to lead.

"We are working with a heavy burden and little time to get people politically literate and engaged," said EDA media director Esraa Abdel Fattah.

Fattah, named one of Arabian Business Magazine's 100 most powerful Arab women in 2011, has earned the monikers "cyber dissident" and "Facebook-girl" for helping organize online Egypt's April 6 Youth Movement in 2008.

She was arrested by Egyptian security that year, and soon became a symbol of defiance against the Mubarak regime.

The months ahead, Fattah says, might be the most challenging yet.

"We only have three months to educate the people in and outside Cairo about pluralism, active citizenship, tolerance, how to evaluate the platforms of candidates. We don't have enough time. We need to work, work, and work," she said.

Meanwhile Fathy, arguing for a longer transition period, said political groups are still waiting for the removal of Mubarak-era limitations on forming parties.

"Before the coming parliamentary elections, we don't think all the freedoms will be relieved," he said. "I'm not concerned a lot about the Muslim Brotherhood, but we don't want to see a political life divided again between two poles like them and something like (Mubarak's ) National Democratic Party."

Shadi Hamid, director of research at the Brookings Institute's Doha Center, says it's not so much about time, but about what gets done.

"If people can take the necessary steps in three months, it should be three months. But we've yet to see a national dialogue about the political structure," said Hamid.

"There should be town-hall meetings tomorrow, serious discussions about electoral law, and constant public forums for people to discuss ideas openly."

Kamal Nabil, an Internet activist and one of the leaders of the January 25 Liberal Movement, is trying to gather all liberal parties and movements in Egypt under one umbrella to promote and advocate for secular liberalism.

"The revolution changed people and they call me asking me what they should do now," he said. "I just tell them please read all you can, listen to all the parties and people, and if one meets your expectations or beliefs, be involved and be active to change your country."

But he and others say while Egyptians have shown a penchant for democracy, they're still trudging through mud.

"Most of the people in Egypt have no idea what a polling station looks like," he said. "We are pushing for the military to accept a civic-awareness program on television. We're raising funds for ads and talk shows that will send educational messages throughout Egypt."

Nabil says he's busy advising and connecting potential political parties, while reaching out to U.S. groups for funding to help him do so.

"Yesterday I was consulting a group that already had 50,000 signatures for a party application, but they've never been involved in political life and there's no framework to help us do this," he said. "Egypt is a whole new model."

Members of EDA, including Fattah and Fathy, say they are discussing establishing a "social liberal" party with leading Egyptian analysts Amr Shoubaki and Amr Hamzawy, research director at the Carnegie Middle East Center in Beirut.

"Tahrir Square made us all political and it's in our hearts," she said, flashing a peace sign. "We are ready for our voice to be heard, we are waiting."