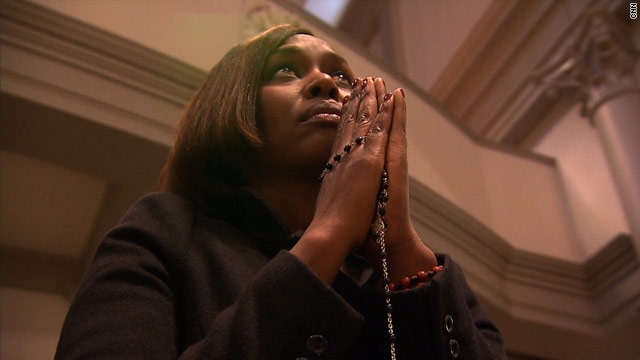 Every week CNN International's African Voices highlights Africa's most engaging personalities, exploring the lives and passions of people who rarely open themselves up to the camera. This week we profile author Immaculee Ilibagiza, a survivor of the 1994 Rwandan genocide.

(CNN) -- When the small African nation of Rwanda descended into chaos in April 1994, Immaculee Ilibagiza and seven other Tutsi women hid for their lives in a tiny, secret bathroom of a Hutu minister.

For 91 terrifying days, the scared women sat in silence inside their cramped shelter, praying the Hutu killers outside their hiding place would never find them.

After three long months, Ilibagiza and the other women emerged as survivors of one of recent history's darkest chapters -- the 1994 Rwandan genocide.

According to the United Nations and Interpol, an estimated 800,000 people, including nearly all of Ilibagiza's family, were murdered by the Hutu during a 100-day period.

Finding refuge in a pastor's house

Living to tell the world

Many of the victims were brutally killed by machetes. Others were raped and disfigured. Nearly an entire generation of children lost their parents in what was one of the worst ethnic conflicts of the 20th century.

Despite her horrific ordeal and personal loss, Ilibagiza has learned to forgive those who murdered her loved ones. Based now in New York, she shares her lessons of forgiveness through writing.

So far, she's published four books, including The New York Times bestseller "Live to Tell," in which she narrates her incredible personal story.

Ilibagiza opened up to CNN about the horrific moments in the tiny bathroom that have shaped her life. An edited version of the conversation follows.

CNN: When the genocide started, your father sent you away to Pastor Murinzi. How do you feel about that decision now, which effectively separated you from your family?

Immaculee Ilibagiza: That day, when I obeyed him, I tried, I said, "But what if something happens to you?" He said, "I want you to listen to me, I can't worry about these people and worry about you. You have to go." So when I said yes, that moment, it was truly out of obedience.

I wish them to let go of the hatred they have.
--Immaculee Ilibagiza
RELATED TOPICS

CNN: Your home for 91 days was a bathroom -- four foot by three foot. When you think about that space, what do you see in your mind, the physical space itself?

II: It was painful, it was small but that wasn't the worst.

CNN: What was the worst?

CNN: You were in this space with seven other women, I can't even rationalize it.

II: Our concern was are we going to live in the next hour, because the killers had come to the house. They did search the house, many times.

The worst day was the first time they came to search. They came right to the door of the bathroom. One of the killers touched the handle and then after he touched it, he's like, "You know what, there's nobody here. We trust you. You are one of us. You are our brother. You can not hide enemies of the country."

CNN: When you left the bathroom, you learned that your entire family except for one brother had been killed.

II: I just broke down and cried and cried. I fell down, no, it can't be.

I cried for like five minutes and all of a sudden, it was almost like this string pulled me back from the ground -- you still have a long way to go, get up. You don't have the time to cry now. And it was true.

CNN: And you've forgiven the killers?

II: I went through a moment in the bathroom where I thought if I came out, I was going to kill people. I had a plan. I was going to be a soldier, I never thought there was another way out.

And then I'm like, OK OK, I pray again. Only in the time I prayed, I had calmness in my body, peace.

CNN: And you forgave them all?

II: I did. It's not that I want to go and just hug them. My forgiveness was truly that I wish them good. I mean what good can you receive in this world? The good is happiness, is joy. And that can only come from a peaceful heart.

So I wish them more than anything to regret the wrong they have done. I wish them to let go of the hatred they have.