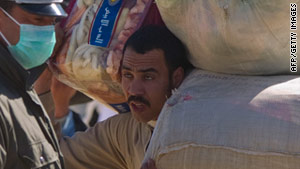 The first of the C-130 cargo planes landed in Cairo at about 3 p.m. Sunday, carrying 82 passengers, the U.S. embassy in Cairo reported. Two more planes were en route with 90 and 72 passengers, respectively. The fourth plane was yet to depart from Tunisia.

There are a few thousand Egyptians left in Tunisia awaiting evacuation after more than 40,000 were taken home, said Firas Kayal, a spokesman for the office of the United Nations High Commissioner for Refugees, on Saturday.

Many countries, such as India, conducted well-organized evacuation operations for their citizens.

Nearly 36,000 Chinese nationals, for instance, have been evacuated from Libya since February 22 -- the largest such effort in the Communist state's 61-year history, the state-run Xinhua news agency reported Sunday.

The last 149 of those evacuees touched down in Shanghai late Saturday, having arrived back in China after a stop in Malta, according a statement from China's foreign ministry.

But people from other countries, including Egyptians and Bangladeshis, have been left to fend for themselves.

Kayal said Saturday more than 10,000 Bangladeshis are awaiting transport in Tunisia. Many of them have had to walk to the border because their money was stolen by soldiers and they could not pay for transportation costs. One man suffered a heart attack and died, aid officials confirmed.

On Sunday, the British government said it would provide emergency evacuation flights to repatriate 500 stranded Bangladeshis.

"I have seen for myself the scale of the humanitarian situation on the Libyan border with Tunisia," said Andrew Mitchell, the international development secretary. "I vowed that we would do everything possible to give those stranded shelter and get them back home as quickly as possible."

Meanwhile, three people died and 14 were missing when they tried to get off a ship headed from Libya's capital, Tripoli, to Crete, the Greek Ministry for the Protection of Civilians said Sunday.

The ship -- flying under Cyprus' flag -- was carrying about 1,280 passengers, mostly Bangladeshis. The ministry said passengers were killed or went missing as they were trying to get off the ship using a rope.

Nigeria's National Emergency Management Agency announced Sunday that 1,243 Nigerians "who had been stranded in Tripoli" arrived in Nigeria. In total, nearly 2,300 Nigerians have been evacuated, the agency's director general, Muhammad Sani-Sidi, said in a statement. The operation has involved large chartered planes and commercial aircraft, the statement said.

The violence in Libya has generated an exodus from the north African nation. Almost 200,000 people, a majority of them foreign workers, have fled Libya -- nearly 100,000 to Tunisia and a similar number to Egypt -- according to the United Nations refugee agency.

The numbers of people entering Tunisia daily from Libya dropped to 1,800 Thursday and Friday and stood at 3,000 Saturday. Previously, they averaged 10,000 to 15,000 people.

Hovig Etyemezian, a field officer for the U.N. refugee agency, attributed the drop in part to fear and the manipulation of the flow of refugees by Libyan authorities.

"A lot of them were scared from leaving because of the fighting, so they were staying in their houses," he said Saturday. "We fear the regime might be blocking refugees from the border."

The U.S. State Department said Saturday it would donate $3 million to the International Organization for Migration as part of a partnership to help thousands of Egyptians and other nationals from Africa, South Asia and Southeast Asia get home.

U.S. government video footage from Sunday showed Army soldiers working with Italian nationals at the Leghorn Army Depot in Italy to pack and ship aid destined to help refugees in Tunisia, along the Libyan border.

CNN's Ivan Watson and Jomana Karadsheh contributed to this report