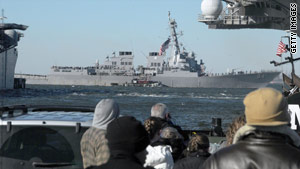 The USS Bulkeley helped rescue an oil tanker in the Indian Ocean from suspected pirates on Saturday.
STORY HIGHLIGHTS

(CNN) -- A U.S. Navy ship came to the rescue of an oil tanker in the Indian Ocean on Saturday after four suspected pirates climbed aboard.

The Japanese-owned MV Guanabara reported it was under attack Friday afternoon 328 nautical miles southeast of Oman, the Navy said. The Guanabara had 24 crew members aboard.

After Guanabara's master confirmed to the Bulkeley that his crew had taken refuge in the ship's citadel room, or secure compartment, the Bulkeley's specialist boarding team climbed aboard Saturday, detained the four men and secured the vessel, the Navy said.

Behind a pirate takedown

There was no exchange of fire at any time during the operation, and an SH-60 Seahawk helicopter supported the boarding team from the air, the Navy added.

Officials said they are still deciding what to do with the suspected pirates. The U.S. Navy did not disclose the nationalities of those detained or where they were being taken.

"Through our mutual cooperation and shared coordination, CTF-151 and our partner organizations has prevented the kidnapping of legitimate mariners who sought only to go peacefully about their business," said CMF's counter-piracy commander, Commodore Abdul Alheem. "Today, there will be a merchant ship sailing freely that would not be doing so were it not for the efforts of CTF-151."

The Combined Maritime Forces is a naval partnership of 25 member nations including the United States that works to disrupt piracy and armed robbery and improve security in international waters off the Middle East.