Libyan fighting could be 'sustained conflict' 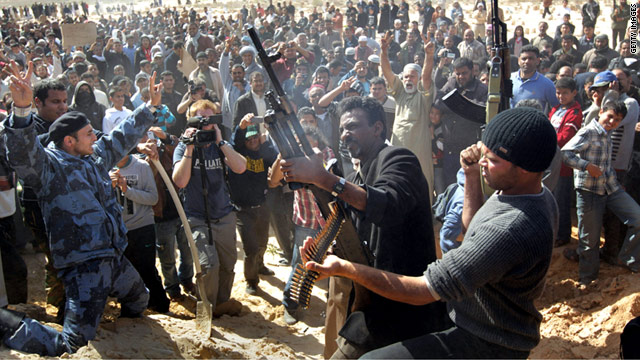 Rebel fighters shoot into the air during a funeral for slain comrades in Ajdabiya, Libya.
STORY HIGHLIGHTS

Washington (CNN) -- Anti-Gadhafi fighters appear to have the resources to carry on the fight against the Libyan government for some time, according to a U.S. official.

"This could be a sustained conflict," said the official, but acknowledged this was a fluid situation.

When asked if the conflict in Libya was now becoming a civil war, the official, who is knowledgeable about U.S. assessments, said the fighting "has the characteristics of a civil war."

The anti-government forces are bolstered by some weapon caches previously under the control of the Libyan government, according to a U.S. official and military officials not authorized to speak on the record.

Defectors from the Libyan military are helping the rebels with fighting and armaments.

"Whole units of the Libyan army have now defected" said a military official. That said, the United States does not have a good read yet on how much of the Libyan military leader Moammar Gadhafi still may control.

When asked about what the anti-government forces had in their control, one of the military officials said they have tanks and anti-aircraft guns.

Some of this, of course, comes from defecting units, but there also has been captures of weapons caches, the officials said. There are large caches of weapons around the country that the official said are no longer secure.

Rebels have been seen with shoulder-fired missiles, anti-tank missiles and small-arms such as rocket-propelled grenades.

The prospect of a civil war could dampen the will of the United States and other countries to intervene directly in the country. American officials have expressed caution regarding military intervention, stressing the need for humanitarian aid first.

President Barack Obama said Thursday he wanted to ensure the United States was ready to respond, if "defenseless civilians were finding themselves trapped and in grave danger."

White House and State Department officials said Friday that even though the opposition is arming itself and fighting the government, that does not entitle Gadhafi to fight his own people. Gadhafi, officials said, lost his legitimacy when his forces fired on innocent protesters.

"It is the people of Libya that are forced to defend themselves in light of the aggression that the Libyan regime has carried on, not just a military forces, but by these mercenaries that are in the employment of Colonel Gadhafi," State Department spokesman P.J. Crowley said.

"The unrest is aimed at ending his rule, his oppressive and violent rule, and we believe that that would result in a more peaceful Libya and would allow the Libyan people to take the kind of steps that they want to take towards a representative democratic government that addresses their legitimate grievances and respects their aspirations," said White House spokesman Jay Carney.

Earlier in the week, Secretary of State Hillary Clinton said the situation demands "a strong and strategic American response."

"In the years ahead, Libya could become a peaceful democracy, or it could face protracted civil war, or it could descend into chaos. The stakes are high," said Clinton.

Libya being in a civil war would "neither enhance or diminish your right as a third party actor to intervene," but the foremost consideration needs to be whether Gadhafi is needlessly cruel to the people of Libya, said Ruth Wedgwood, professor at Johns Hopkins School of International Advanced Studies.