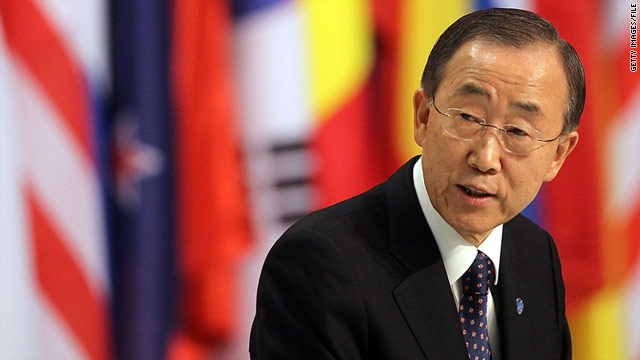 (CNN) -- The United Nations on Monday accused Belarus of defying an arms embargo against Ivory Coast by delivering three attack helicopters to the disputed president of the West African nation.

A spokesman for U.N. Secretary-General Ban Ki-moon said that the helicopters and other related materiel "are reportedly being delivered at Yamoussoukro," the nation's capital, for Laurent Gbagbo's forces.

Ban is pushing for an urgent meeting of the U.N. Security Council on the matter, the spokesman said.

"The first delivery arrived reportedly on a flight which landed this (Sunday) evening and additional flights are scheduled for Monday," the spokesman said in a statement.

U.N. spokesman Martin Nesirky said Monday afternoon that U.N. officials on the ground in Ivory Coast were unable to confirm whether the delivery was made, saying they were forced to withdraw from the airport before they were able to verify the report.

U.N. officials later said that the team sent to investigate the possible breach of sanctions was fired upon Monday by local security forces in the Ivory Coast.

Gbagbo, the nation's incumbent leader, is clinging to the presidency despite an international call for him to step down after an electoral commission declared challenger Alassane Ouattara the winner of a November election.

The deliveries violate an arms embargo that has been in place since 2004, Ban's spokesman said.

Andrei Savinykh, a spokesman for the Belarusian Foreign Ministry, vehemently denied the allegation, calling it part of a campaign of "lies and slander" against Belarus.

A "destructive information attack is being carried out" against Belarus, said Savinykh, according to the Belarus state-run Belta news agency.

Violence in Ivory Coast escalated sharply over the past week, after four African heads of state left Abidjan. They had been given a mandate by the African Union to find a "binding solution" to the post-election crisis in Ivory Coast.

Gbagbo and Ouattara supporters have clashed in the central cities, Yamoussoukro and Daoukro, in addition to ongoing fighting in Abidjan.

Ouattara is holed up in the Golf hotel in Abidjan under the protection of U.N. peacekeepers.

CNN's Maxim Tkachenko and Joe Vaccarello contributed to this report