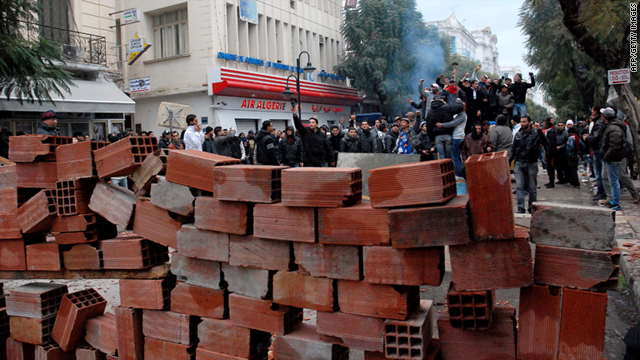 Tunisian demonstrators stand behind a barricade as they clash with Tunisian security forces during an anti-government protest in Tunis on February 26, 2011.
STORY HIGHLIGHTS

(CNN) -- Protests in Tunisia turned violent and deadly Saturday, just over six weeks after a popular uprising forced the president out of office, and lit a spark of desire for democratic reform in parts of Africa and the Middle East.

Three people were killed Saturday and nine others injured during mayhem in the capital, Tunis, according to a Interior Ministry statement cited by the state-run news agency, Tunis Afrique Presse (TAP).

More than 100 people were arrested, the ministry said, in the area around Habib Bourguiba Avenue, in the city's center, accused of "acts of destruction and burning."

Protesters had gathered in the area to demand that the interim government step down and the current parliament be disbanded. Demonstrators were also asking for suspension of the current constitution and the election of an assembly that can write a new one, as well as organize the transition to democracy.

Several people infiltrated peaceful demonstrators in the Tunisian capital "to commit acts of disturbance, burning and looting," according to TAP, which also reported that a cylinder of liquefied petroleum gas exploded in front of a building along the avenue.

There are rumors in Tunis that the violence was perpetrated by people who are still loyal to ousted President Zine El Abidine Ben Ali and want to spread chaos and nostalgia for the old regime.

Similar violence broke out in the same area on Friday night as well, according to TAP. The agency cites an Interior Ministry source that claims acts of vandalism and destruction along the avenue resulted in injuries to 21 policemen.

Protests in Tunisia erupted late last year. Fed up with corruption, unemployment and escalating prices of food, people began demonstrating en masse after the self-immolation suicide of a fruit cart vendor in December. By January 13, Ben Ali -- who had ruled Tunisia since 1987 -- turned executive power over to his prime minister and fled the country.