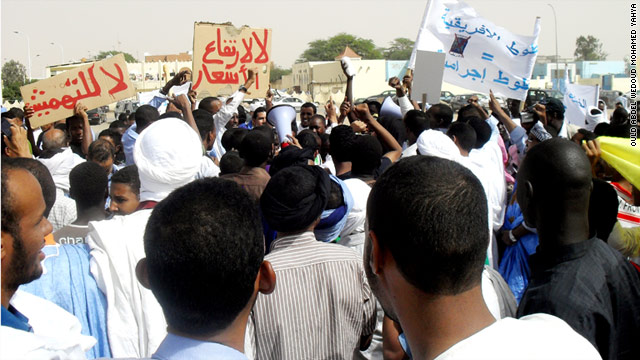 Mauritanians call for social and political reforms during demonstrations on Saturday in Nouakchott.
STORY HIGHLIGHTS

Nouakchott, Mauritania (CNN) -- Young Mauritanians pushing for social and political reforms continued a sit-in Saturday in the capital a day after a street protest demanding change.

Police dispersed hundreds of protesters early Saturday, but after a few hours the crowd returned to spend the night at Blocat Square in Nouakchott's city center, despite one earlier arrest and the possibility of forces returning.

"The purpose of the youth demonstrations that we are leading (is) aimed at pushing the ruling regime to make urgent social, economic and political reforms for the sake of better life conditions," said protester Mohamed Ould Sidie. "We don't belong to any one of the political parties, and we don't want to.

"Mauritania is a very rich country, but unfortunately the huge riches of the country, including gold, oil, minerals, fish, are mismanaged by the corrupt, political regimes," said Sidi. "It's time to make a change."

Protesters carried banners calling for job creation, economic and political changes and an end to corruption.

The organizers declared the birth of what they called "Youth Coordination" and promised to continue the protests over the next days.

The call to action started last week on Facebook, which is said to be very popular in Mauritania, a journalist told CNN Friday.

Young protesters were surrounded by police during several hours of peaceful demonstrations Friday, according to reports.

Mauritania Prime Minister Moulaye Ould Mohamed Laghdaf said Thursday that people were free to protest peacefully, because "this is a democratic country," the journalist told CNN.

The Islamic Republic of Mauritania borders the North Atlantic Ocean between Senegal and Western Sahara.

According to the Central Intelligence Agency website, half the population still depends on agriculture and livestock for a livelihood.