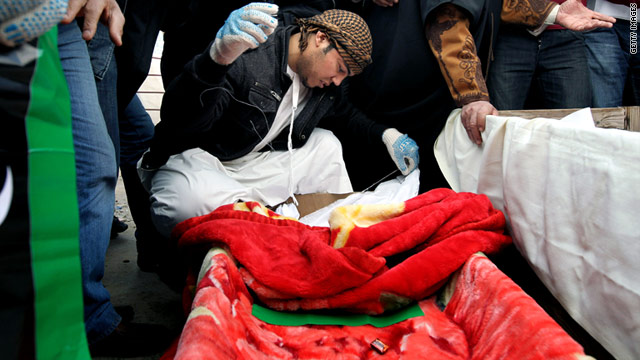 As victims fall to violence from protests in Libya, the Gambian government says the African Union should discuss how to avert bloodshed.
STORY HIGHLIGHTS

(CNN) -- Gambian President Yahya Jammeh slammed the African Union for its "unacceptable silence" on the brutal crackdowns on revolts in North African nations and urged Libya's Moammar Gadhafi to step down immediately.

"It is ... a shocking reality that in all the happenings, beginning with the crisis in Tunisia, to that in Egypt, and now Libya and countries in North Africa, the leadership of the African Union (AU) neither made a statement nor took action despite the fact that these were uprisings affecting member states," said Jammeh's statement, read on national television by the president's chief of staff Thursday.

The Gambian government said the least the African Union could have done was to discuss -- as Africans -- how to avert bloodshed. Instead, the Gambians said, the lead has been taken by other non-African nations.

"The AU should not and cannot play second fiddle in situations as we now see them happening on the continent," Jammeh's statement said.

"If the AU cannot stop the carnage taking place in some of its member states, then it cannot be in a position to bring a continental government capable of lifting Africa out of abject poverty and under-development. Whether Black or Arab Africa, we are all Africans without discrimination."

A statement from the chairman of the African Union's commission Wednesday condemned the "disproportionate use of force against civilians" in Libya and deplored "the many human lives lost so far."

"The chairperson of the Commission reiterates the appeal made by the (African Union) Peace and Security Council for an immediate end of the repression and violence," said the statement from Jean Ping.

"He stresses that only dialogue and consultation will enable the Libyans to find appropriate solutions to the challenges facing their country and to embark upon the necessary reforms to fulfill the aspirations of their people."

The Gambian president's statement urged Gadhafi to resign, a somewhat surprising statement given the cordial relations in the past between the two nations.

He also asked Africans to resist working as mercenaries. There have been reports that Gadhafi has paid non-Arab thugs to help suppress the uprising.

"We are calling on all Gambians in Libya and around the world not to be used as mercenaries because the current revolution taking place in Libya is one that will not fail, Allah willing," the statement said. "Any Gambian that is captured as a mercenary in Libya should not expect any intervention or support from the Gambia government."