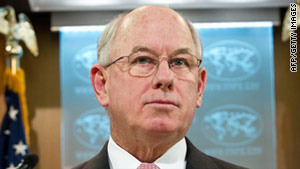 P.J. Crowley says most of Libya's former chemical and WMD programs have been eliminated or destroyed.
STORY HIGHLIGHTS
RELATED TOPICS

Washington (CNN) -- The chaos in Libya has raised fears about the security of deadly mustard gas stockpiled in the country and whether Libyan leader Moammar Gadhafi might use it on his own people.

A U.S. official said that in a "chaotic situation" there is concern about Libya possessing mustard gas and other chemical agents.

Although there has been no signs that the Libyan leader has ordered their use, Gadhafi is often described by officials as an unpredictable, mercurial individual.

Libya still has approximately 10 tons of the deadly blister agent left in its arsenal, according to Peter Crail, a non-proliferation expert at the Arms Control Association.

Most of the materials are located at the Rabta chemical weapons facility located in a town south of the capital city of Tripoli.

In 2003, Libya agreed to destroy its entire chemical weapons arsenal, which included some 25 tons of mustard gas and 3,300 empty aerial bombs. The Organization for the Prohibition of Chemical Weapons (OPCW), an international watchdog, is overseeing the destruction.

The entire stock of shells and bombs was literally crushed by bulldozers in 2004.

State Department Spokesman P.J. Crowley said the destruction of the delivery systems was critical. "We have eliminated or destroyed the most dangerous elements of Libya's former WMD programs, including its chemical weapons munitions. There are some chemical weapons-related materials that remain in Libya today, but they are not in weaponized form."

Without a delivery system, Crail said "Libya does not have an effective way to distribute the mustard gas." He added it could conceivably be done by dropping the chemicals from a helicopter, but he doubted Libya would do anything like that.

The U.S. official said it would require people "who really know what they are doing" to handle the chemical agents -- a "tall order" at this point.

And Crail questioned whether any military personnel would be willing to use the deadly materials against their countrymen, given the reports of defections among the ranks and the failure to obey orders.

The elimination of the mustard gas and other chemical agents has dragged along.

The remaining 10 tons of material were to have been destroyed by the end of 2010; however, OPCW agreed to extend the deadline until May 15 of this year.

Crail said Libya has dragged its feet because it feels the United States and the United Kingdom have not carried through on their promises for scientific cooperation and help with building nuclear reactors in Libya.

There also are security concerns. Although State Department spokesman Crowley said the U.S. "believes that these materials remain secure," another U.S. official said they might be vulnerable to looting if the situation deteriorates in Libya and that raises concerns about whether extremists could get their hands on the deadly chemicals.