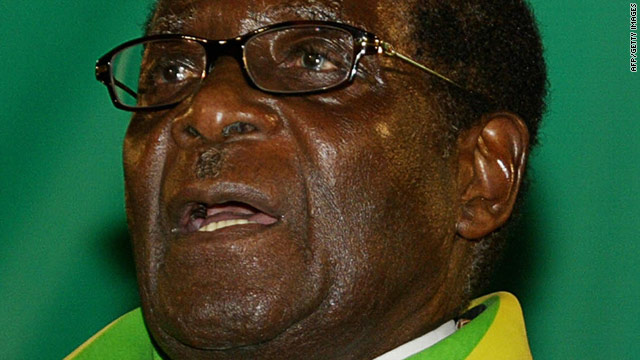 President Robert Mugabe's policies have been blamed for plunging the once-prosperous country into an economic crisis.
STORY HIGHLIGHTS
RELATED TOPICS

The 46 defendants have been charged with treason, prosecutor Edmore Nyazamba told a packed courtroom. They were arrested Saturday after authorities said they were caught watching footage of the protests that led to the ouster of Tunisian leader Zine El Abidine Ben Ali of Tunisia in January and of Egypt's Hosni Mubarak two weeks ago.

"On 16 February they held a meeting and the purpose of the meeting was to org anise, strategize and implement the removal of a constitutional government of Zimbabwe by unconstitutional means, the Tunisian-Egyptian way," Nyazamba said.

"In their speeches, the accused highlighted that there was a long serving dictator/authoritarian leader, general hunger, poverty, unemployment and capitalist tendencies where wealth is enjoyed by a few individuals while the general populace is suffering."

On Wednesday, the activists' lawyer said he would oppose the charge against his clients, who were ordered to remain in custody overnight.

"There is no basis for placing them on remand," the attorney, Alec Muchadehama, argued.

Mugabe, who turned 87 on Monday, has ruled Zimbabwe since independence in 1980. Like Mubarak and Ben Ali, he has been accused of rigging elections and instituting repressive laws to tighten his grip on power.

The arrests may be an indication authorities are worried that the winds of change sweeping across north Africa may inspire Zimbabweans to rise up. The opposition Movement for Democratic Change, MDC, which is in a troubled unity government with Mugabe's ZANU-PF, has called the arrests "an abuse of state machinery by ZANU-PF to suppress the people's views."

Mugabe's policies over the past 10 years have been blamed for plunging the once-prosperous country into an unprecedented economic crisis. Mugabe has called for an election this year, but his political rival and leader of the MDC, Morgan Tsvangirai, has threatened to boycott the poll if a referendum on a new constitution is not held.