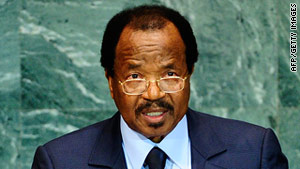 (CNN) -- Opposition groups in Cameroon are planning "Egypt-like" protests Wednesday to call for the president's ouster after almost three decades in power.

President Paul Biya is running for re-election later this year.

"People yearn to see a change in government. He's been in place for 28 years," said Kah Walla, 45, an opposition member who is also running for president.

Walla, one of the main organizers, said protests are planned in Douala and the capital, Yaounde.

"Our main reason is to ask for free and fair elections," she said. "We also have other demands ... Cameroon has a lot of resources yet our people are living in poverty."

A spokesman for the prime minister was not available for comment and a man who answered the phone at the president's office declined to comment.

Walla said the nation has been inspired by the recent uprisings in Tunisia and Egypt that led to the ouster of their longtime rulers. The protests have ignited a chain reaction that has spread to other countries, including Libya and Yemen.

"We want to take charge of our destiny like the people in Egypt and Tunisia did," Walla said.

The U.S. Embassy in the Cameroon capital urged its citizens to be careful.

"As always, U.S. citizens should avoid all demonstrations, as even peaceful ones can quickly become unruly and a foreign national could stand out and become a target of harassment or worse," the embassy said in a statement Wednesday.

In 2008, protesters took to the streets on the same day to protest food prices.

Walla said they chose the date because it is "symbolic of the ongoing fight" in the west African nation.