By Isma'il Kushkush, For CNN 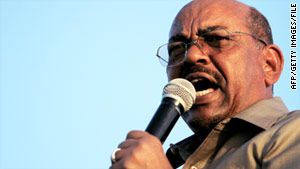 Sudanese President Omar al-Bashir says he will not run for re-election, according to officials.
STORY HIGHLIGHTS

"President al-Bashir will not run in the next election in four years," said Rabi Abd al-Ati.

"He will also leave his post as chair of the NCP to allow for the transformation of power to a new generation," Abd al-Ati added.

The senior NCP member rejected the notion that al-Bashir's decision was prompted by popular uprisings in the region, including neighboring Egypt.

"On more than one occasion, the president has expressed his desire not to continue, but he was pressured by the [ruling] party to continue to see through the implementation of the peace agreement," Abd al-Ati said.

"In Egypt, there was a gap between the president and the people; in Sudan, the president is seen on weekends attending and participating in social and public ceremonies," he added.

Al-Bashir has ruled Sudan since 1989, when he led an Islamist-backed coup to take power. In 1999, he fell out with his mentor, Islamist leader Hasan al-Turabi, who is now a member of the opposition.

In 2005, the president signed a peace deal with the southern Sudanese rebel movement, the Sudan People's Liberation Movement, ending a decades-long war between the Arab and Muslim-dominated north and the predominately black animist and Christian south.

Last month, residents of southern Sudan voted overwhelmingly in a referendum to separate from north Sudan, and the region is set to officially become an independent state on July 9, 2011.

In 2010, al-Bashir won elections that were mostly boycotted by the opposition amidst allegations of rigging. The next elections are scheduled for 2015.

An arrest warrant was issued against al-Bashir in 2010 by the International Criminal Court (ICC) for genocide, war crimes and crimes against humanity in the region of Darfur, where war has continued since 2003. It was the first such warrant issued for a sitting head of state, and some argued that his position gave him immunity from prosecution.

The United Nations puts the death toll in Darfur at 300,000 as a result of violence, disease and malnutrition. The Sudanese government says 10,000 have died.

Abd al-Ati also rejected the idea that fear of an ICC arrest would deter al-Bashir from stepping down.

"We are not a member of the ICC, we do not recognize it and we have the support of the African Union, the Arab League, the Non-Alignment Movement and the Organization of the Islamic Conference," he explained. "We are not ready to hand over any Sudanese citizen and that is not subject to change."