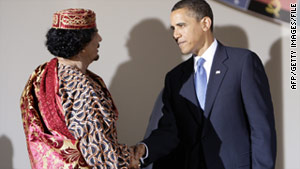 Among other things, Washington was taking a close look at a speech delivered Sunday by Saif al-Islam Gadhafi -- Libyan leader Moammar Gadhafi's son -- which included warnings of a civil war if demonstrations in the North African country don't stop.

Obama officials continued to discuss with their Libyan counterparts the need to avoid violence against peaceful protesters, the official added.

President Barack Obama was briefed on the situation in Libya by his national security adviser, Tom Donilon, on Sunday night, the official also said.

Despite the warning from Gadhafi's son, Libya's protesters are showing no sign of an intention to back down. After Gadhafi's government apparently lost control of the city of Benghazi, some angry protesters in Tripoli said they hoped for a similar turn of events in the nation's capital.

Tripoli residents said state-run al-Shababiya TV was attacked Sunday evening by anti-government protesters. CNN, however, could not immediately confirm reports. The Libyan government maintains tight control on communications and has not responded to repeated requests from CNN for access to the country.

The current unrest, spurred largely by demands for freedom and angst over high unemployment, has left at least 233 people dead in Libya, according to Human Rights Watch, citing information from hospital sources.

CNN's Alan Silverleib and Jill Dougherty contributed to this report