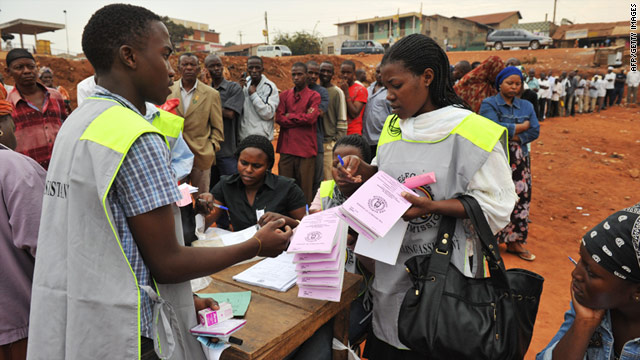 Polling workers get ready to open a voting station as people wait in line at a polling station in Uganda's capital Kampala.
STORY HIGHLIGHTS

(CNN) -- Ugandans voted Friday in a presidential election that could extend the term of the incumbent, who has been in power for 25 years.

This is the third consecutive time opposition front-runner Kizza Besigye has run against Museveni.

Voters lined up early to cast their ballots at various venues including schools, government offices and churches. In the capital, Kampala, streets were calm and empty, with increased security forces patrolling in riot gear.

We cannot trust an electoral commission that was appointed by the ruling party. We have to have our own check mechanism.
--Margaret Wokuri, spokeswoman for the opposition Inter-Party Cooperation.
RELATED TOPICS

His party said it anticipated rigging, and it plans to conduct its own tally as soon as the polls are closed. The government has dismissed the accusations and said the opposition is trying to undermine the election.

"We plan to have our own tally and release it in 24 hours," said Margaret Wokuri, a spokeswoman for the opposition Inter-Party Cooperation. "We cannot trust an electoral commission that was appointed by the ruling party. We have to have our own check mechanism."

Museveni, leader of the ruling National Resistance Movement party, has led the country since a rebel group he was aligned with seized the government in 1986.

He was once hailed for stabilizing Uganda and helping combat the AIDS epidemic, but has faced mounting criticism over corruption and lack of political transition in the country.

About 14 million people are registered to vote in the presidential and parliamentary ballot.

There are a total of eight presidential candidates, Wokuri said.