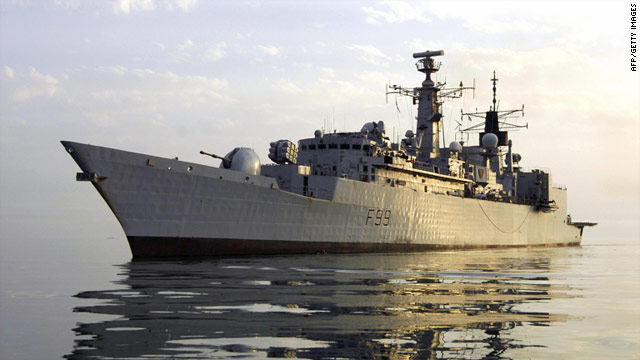 A 2007 file photo of the British Navy frigate HMS Cornwall on station in the Persian Gulf.
STORY HIGHLIGHTS
RELATED TOPICS

The hostages were the original crew of a fishing dhow who had been held hostage aboard their Yemeni-flagged vessel for 92 days, the Royal Navy said in a statement.

Since taking the dhow on November 11, 2010, the pirates used it as a "mother ship" for raiding operations, equipping three skiffs with powerful outboard motors, ladders and other paraphernalia, according to the statement.

The rescue operation was carried out Thursday by boarding teams from the Cornwall, supported by Lynx helicopters, according to the statement. The frigate had received a distress call from a South Korean merchant vessel in the area, whose crew had become suspicious of the dhow's actions.

After rescuing the fishing crew and apprehending their captors, the Cornwall restored the vessel to its rightful Yemeni owners, the Royal Navy said.

Cmdr. David Wilkinson of the Cornwall described the action as a "very slick boarding operation which has ensured that this pirate vessel is no longer able to operate" and restored the crew to their families.

The Cornwall is part of the Combined Maritime Forces, a multinational naval partnership operating in the Gulf of Aden under U.N. Security Council resolutions "to disrupt piracy and armed robbery at sea," and to assist regional partners in developing the capabilities to protect shipping in waters beset by pirates in recent years, the Royal Navy said.