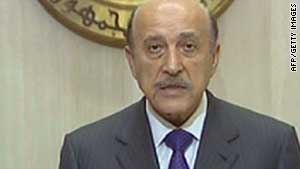 "This is a very historic hour in the history of the homeland. People are concerned about the stability of Egypt. We call upon you to unite and to think rationally and to look toward future. The youth movement of January 25 has succeeded in implementing a very important change in process of democracy, and the change has already started. The constitutional decisions have been taken and the committees have been meeting regarding the decisions taken by the president in his first speech on Februrary 1.

"What the president declared today affirms one more time his national sense and the response to the demands of the people and his commitment to pledges he made upon himself. It also proves for his awareness of the danger and the gravity of the very critical moment that Egypt is going through right now.

"Mr. President has also made a priority of the interests of Egypt over any other consideration, and he is also responsible for the national action in order to restore the safety and security of Egypt and the stability of Egypt and the preservation of its gains and achievements and to repel all the dangers against the people and to restore tranquility to the hands of the people and to restore life to normalcy. I ask -- I call upon all the people to continue to achieve this objective, and I have no doubt that the people will also be able to protect its own interests.

"We have opened the door of dialogue and we have reached some understanding, and we have a road map to achieve most of the demands in accordance with the given time door. The door is still open for more dialogue. In this context I want to confirm the following: I am committed to do whatever it takes in order to have an orderly transition of powers in accordance with the constitution, and I'm also committed to implementing all that I have taken, all the pledges that I have taken for the national dialogue, and what we have agreed to do later.

"And I also preserve the achievements of the youth movement and also to restore the confidence among us in respect of the law and the constitution, and I will also achieve all the demands of the people through dialogue and through a civilized dialogue within this context. I call upon all the citizens to look to the future. In our hands we are able to make a very bright future and to be full of freedom and democracy. The people of Egypt are heroes, and they will not go after chaos and the dangers of chaos, and will not allow the agendas of danger to have any existence among us. Let us work together. Let us follow the same track on a new path that will achieve the aspirations of the people and the young people and the generations with a good life and a safe life that is very stable, that is prevalent with love of the homeland, that we need to preserve and to sacrifice for its sake with everything we own.

"I call upon the young people and heroes of Egypt, go back to your houses, go back to your work. The homeland needs your work. Let's build together. Let's develop together and let's be creative together. Do not listen to the satellite stations that have no objective but to sew sedition among people and to weaken Egypt and to mar its image. Just listen to your consciences and to your awareness of the dangers that are around you. We have already started, depending on God and depending on our institutions and depending also on the armed forces that have also preserved the revolution of the young people and defended the constitutionality of the homeland and also preserved the safety and security of the people and their properties. It is high time that we work together and let's walk together in solid belief to come out of the crisis and to face the challenges.

"We will work together with one team, and in one determination, one Egyptian determination that will never be lenient. I have pledged to God and to you that I will work with the homeland with everything that I own in order to preserve its security and the growth of its people in the name of God. And God will see your work and the prophet will and the believers will see. May God's peace be upon you."