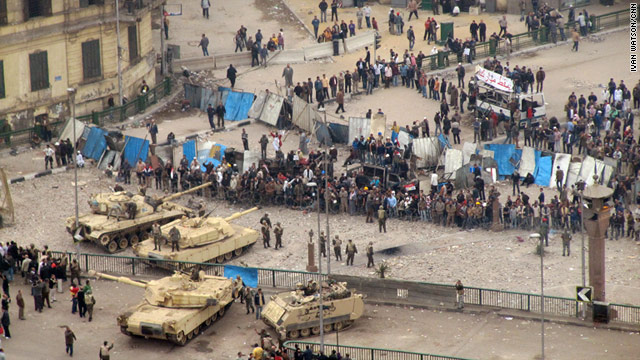 Protesters line up against Egyptian military tanks at an entrance to Tahrir Square on Saturday.
STORY HIGHLIGHTS

Cairo, Egypt (CNN) -- Opposition activists formed a human chain outside one of the entrances to Tahrir Square on Saturday afternoon to prevent two Egyptian military tanks from crossing through barricades into what has effectively become an anti-Mubarak enclave in the heart of the Egyptian capital.

An eyewitness said scuffles broke out after an army general asked demonstrators to take down their makeshift barricades of corrugated steel and debris, which were built up during 48 hours of bloody fighting with regime supporters next to Cairo's landmark Egyptian Museum.

"This general went through the barricades, they [the soldiers] knocked down some barricades on the way to the museum, which caused some panic and scuffling," said photographer Ron Haviv. "When he did it all chaos broke loose."

Haviv said that initial tension was defused after Gen. Hassan Al Roweni began negotiating with medics who have established a first aid station for wounded combatants just behind the first line of barriers.

"He is still talking to doctors at the clinic," Haviv said. "He is asking them to remove the clinic."

Later, Roweni made a tour of Tahrir.

Military guards in red berets struggled to hold back the enthusiastic crowd as many Egyptians tried to embrace and kiss the general amid chants of "The military and the people are one hand."

Over the past week, Tahrir Square has been transformed from a bustling urban center into a fortified campground inhabited by thousands of well-organized anti-Mubarak demonstrators. It includes sidewalk first aid clinics and stations for charging cell phones, and the protesters respond to threats by blowing whistles and clanging metal rods. The alarm prompts scores of men to race to the entrances to the square, where rocks for stone-throwing are stockpiled in preparation for possible battles.

The officer took to the stage erected at the north end of the square for several minutes and made an unsuccessful attempt to appeal to the demonstrators.

"You can all express your views and opinions freely, but I ask you to put the security of Egypt first," Roweni announced through a loudspeaker system.

"This is directed to the youth of January 25th," he added, referring to the date when protests first erupted, throwing Egypt into what many observers now call a political revolution.

"There are many people who are manipulating you," Roweni said.

The crowd chanted a simple answer: "No, no, no."

The general concluded his short statement by saying, "I don't understand what it is you want."

The crowd roared back a chant that has been repeated for days across the open expanses of Tahrir Square: "Leave, leave, leave. He leaves, we leave."

This call for Egyptian President Hosni Mubarak to resign is the demand that unites the grass-roots movement in Tahrir.

After hearing the answer from the crowd, Roweni left the stage and the square without saying another word.