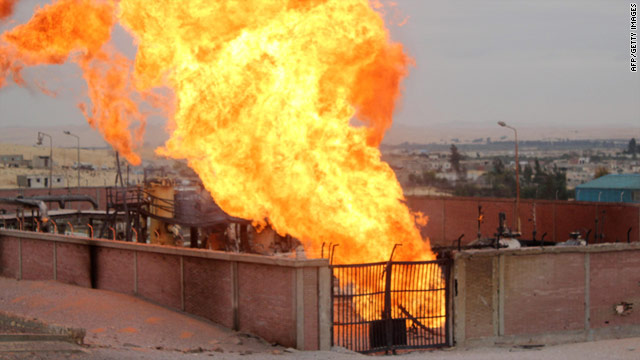 (CNN) -- A pipeline that sends natural gas to Jordan was set on fire in the Egyptian Sinai town of El Arish on Saturday, and the suspected act of sabotage has forced its temporary closing, officials said.

Ghaleb Al Maabreh, head of Jordan's national electricity company, confirmed the closing. He said at least one week will be needed to fix it and the cost for the repair will be covered by Jordan.

Al Maabreh said the government will start using alternative sources that will cost it $4.2 million daily. It is able to provide itself with energy sources for the coming three weeks, he added.

Unless the pipe is repaired quickly, it could become a big problem for Jordan, a country already spending heavily in fuel subsidies, a Jordanian senior official said.

As a precaution as it responds to the incident, Egypt's gas company decided to stop pumping gas in the area altogether, including gas going to neighboring Israel. Israel has been getting supplies from a location 20 kilometers away from the damaged gas pipeline in El Arish.

Israel is still getting natural gas from another source, and Israeli Prime Minister Benjamin Netanyahu, who conferred with a Cabinet minister and security officials, said the country is prepared to immediately use alternative sources of energy supplies.

Egyptian state-run Nile TV described the damaged line as "one of the main gas pipelines" there.

The state-run MENA news agency said it was a suspected terrorist attack.

The governor of Sinai told Nile TV that the flames were under control and firefighters were working to extinguish the blaze.

He called the fire a sabotage attempt

However, it is not clear whether the incident is connected to the political unrest in Egypt or even the Palestinian territories.

Hamas, the Palestinian movement that runs Gaza, issued a statement denied it had been involved in any attack on the station.

On Friday, a government official told CNN a rocket-propelled grenade was fired at state security headquarters in El Arish.

The official, who asked not to be named because he is not authorized to speak about the incident, said the strike caused a fire but there were no casualties.