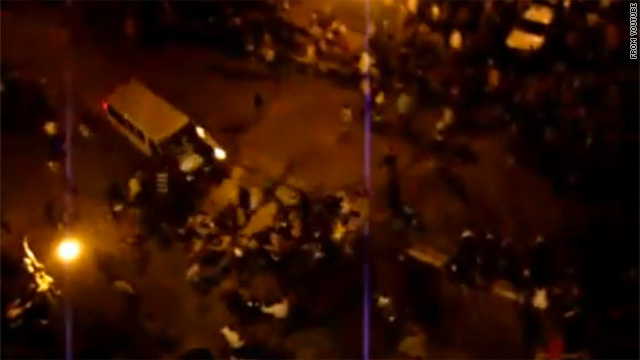 Washington (CNN) -- A white diplomatic van shown plowing into anti-government protesters in Cairo might belong to the United States, officials said, adding that 20 such vehicles have been stolen in Egypt amid the unrest.

The YouTube video, dated January 28, is one of three from recent days showing drivers seemingly purposefully ramming their vehicle into demonstrators in streets that appear to be around Cairo's Tahrir Square.

The footage caused an uproar online, some of it related to the fact that the van appeared to resemble a U.S. diplomatic vehicle.

"Obviously, we've seen some of the reaction on YouTube and other forums, which is why we're trying to get out and knock this erroneous story down," U.S. State Department spokesman Mark Toner said Friday afternoon.

Fellow State Department spokesman P.J. Crowley was the first to comment earlier Friday, saying that American officials were "very aware" of the video and trying to get more information on what happened.

Later, the State Department and U.S. Embassy in Egypt issued a joint statement also acknowledging video of the "hit-and-run" incident that "injured dozens in Cairo." A spokesman did not explain how U.S. officials came to that casualty toll.

The statement noted that "a number of U.S. Embassy vehicles" were stolen on January 28, when Egyptian police abandoned their posts in droves around Cairo. Toner later clarified that 20 vehicles had been taken.

"Since these vehicles were stolen, we have heard reports of their use in violent and criminal acts," the statement said, alluding to the possibility that one might be the van shown on the YouTube video. "If true, we deplore these acts and perpetrators."

The U.S. release added, "We are certain that no embassy employees or diplomats were involved."