Foreigners scramble to get out of Egypt as protests turn violent 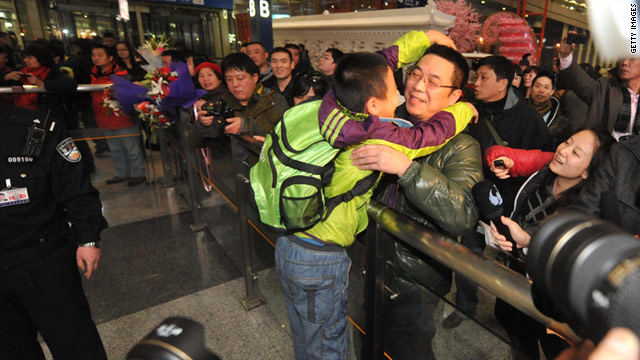 A young passenger returning from Egypt hugs a member of his family at Beijing airport on Tuesday.
STORY HIGHLIGHTS

Cairo, Egypt (CNN) -- American citizens who want to leave Egypt on a U.S. government flight should report to the airport as soon as the nightly curfew ends, according to official Twitter messages from the Department of State Bureau of Consular Affairs.

More than 1,900 U.S. citizens and their family members have left Egypt since an evacuation operation began Monday, according to a statement from the U.S. State Department.

Evacuation flights had been scheduled to run through Thursday. The State Department said late Wednesday that additional government flights after Thursday are unlikely.

Americans who want to leave should should not wait for a call from the U.S. Embassy, according to the Bureau of Consular Affairs' website. They should go to Cairo International Airport and report to the HAJ Terminal 1, Hall 4 as soon as possible.

American vows to stay in Egypt

Chartered planes organized by the U.S began flying out nonemergency American personnel and their relatives on Monday. The State Department also has been providing passage for any U.S. citizen wishing to leave Egypt.

The department had said Americans should arrive at Cairo International Airport during non-curfew hours. A media note from the State Department warned U.S. citizens to move carefully in the streets and to avoid demonstrations along the way.

The U.S. Embassy had been assisting in the evacuation of citizens with expired passports. Any American with out-of-date paperwork could go directly to the airport, as long as the passport in question had expired within the past 10 years, according to the State Department. Americans with passports that expired more than 10 years ago were advised to go to an embassy to get a replacement.

The State Department said Wednesday that the U.S. Embassy in Cairo would remain open during non-curfew hours.

Americans flying out of Cairo were part of a wave of foreigners who scrambled to leave Egypt on Wednesday, as the demonstrations that gripped Egypt for more than a week turned violent.

British carrier BMI said it has organized an extra flight to help British nationals get back to the UK. The British Foreign Office said it was sending a charter flight to Cairo on Wednesday to fly back British citizens with no other way to get home.

Other countries, including China, Canada, India, Thailand and Australia were attempting to get stranded citizens out of Egypt.

Australian Prime Minister Julia Gillard said her government would provide an emergency flight that will depart from Cairo on Wednesday, a statement from her office said.

The flights are part of a broadening effort by governments worldwide to transport their citizens out of the country.

About 52,000 Americans are believed to be in Egypt -- more than 2,600 of whom have asked to be evacuated, the State Department said. They'll be asked to sign documents promising they will reimburse the government for the flights. Exact costs hadn't been determined, but a State Department official said it should be comparable to a one-way commercial flight from Egypt to the evacuation points.