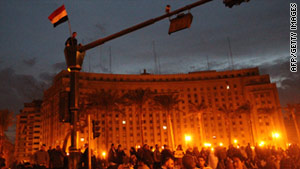 Unrest in Cairo, Egypt, has forced neighborhoods to provide for their own security.
STORY HIGHLIGHTS

Editor's note: CNN's Arwa Damon has reported from the front lines of the wars in Iraq and Afghanistan. Here, she describes the street scenes of Cairo.

Cairo, Egypt (CNN) -- As curfew kicks in, young men carry sticks, swords, machetes, meat cleavers, axes -- anything they can find to arm themselves.

They come out en masse, set up makeshift checkpoints and guard access to their neighborhoods.

Children carry knives longer than their forearms. The kids wave down cars and peer in warily. They are among the youngest members of neighborhood watch groups that have sprung up across Cairo.

With their country teetering on the brink of the unknown, these residents have taken security into their own hands. Many haven't slept in days. The official police force is nowhere to be seen, say many witnesses.

One of the main roads through the capital -- Pyramid Road leading to one of Egypt's most historic sites -- resembles a battlefield rather than the popular food and shopping stop known to Egyptians and tourists. Windows are broken, awnings hang in tatters, stores that survived the various rampages remain shut, their windows white-washed or covered in newspaper.

This is not the capital that millions across the world would recognize; nor is it one that many residents want the outside world to see.

While the demonstrations at Tahrir Square speak to an era of change, the rest of Cairo speaks to the broader repercussions of demanding that change. Lines extend at popular bread factories amid fears of a food shortage.

Gallery: Protesters take to the streets in Egypt

Egypt's protesters not swayed by tanks

As CNN films from a bridge nearby, people standing in line gesture for us to stop. A child picks up a rock.

He threatens to break our camera.

That same anger and frustration is felt throughout the city, especially toward the news media. The rage has intensified among those away from the demonstrations -- some say the news media is showing distorted images of Egypt.

In the chaos at another bread line, a woman says Egyptians want President Hosni Mubarak to stay. The men there angrily demand that CNN leave, saying they don't want to be filmed in this sort of a desperate situation.

The same woman we met then comes to our car and apologizes for the way we are treated.

"It's only because of the terrible situation that we are in," she says, referring not just to the uncertainty but also to the struggle that daily life has become.

"We are good people. We are sorry."

It's not just the food shortages that are of rising concern. Most of the gas stations on major roads in the heart of the capital are closed. One owner, who did not want to appear on camera or have his station filmed, said it was because of security. He then ordered us to leave.

Another gas station had simply run out of fuel and was hoping that a tanker would appear. It doesn't seem likely.

Banks are all closed; the screens on ATM machines blank.

At one middle-class neighborhood, a woman in a black abaya demands to see our press credentials. A crowd gathers, shouting.

Muna al-Mahdi is the only person willing to air her grievances on camera.

"Give him two months, give him time to work," she says. "And then he can go peacefully."

Her voice quivers even more as she switches to Arabic to ask, "Who is going to govern Egypt? A bunch of youth?"

Another woman shouts: "I don't agree with you. You're not giving the right impression."

As the two women argue, a man in the crowd pushes his hand against the camera.

Tensions rise. I head head back to the car with the rest of the CNN crew. Just as we're about to leave, a group of men -- headed by one wielding a machete -- stops the car in the parking lot.

The man screams to know what and why we are filming. He demands the tape, threatens to drive his machete into the hood of the vehicle. Eventually, we are able to leave peacefully.

Yet however much the winds of change are threatening to tear this nation apart, the demonstrators are determined to weather it.

"People here are supporting each other, you know. My neighbor gave us food, gave us water and all that we need. All the stores are supporting the people," Barak Saleh says as he heads back to the demonstration ground.

A group of young men carry a yellow sign painted in red. "Game over," it reads.

Overhead, a kite flutters in the wind.