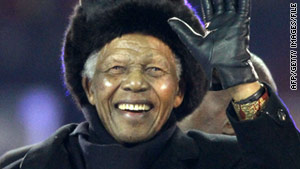 A spokesman for the African National Congress said Mandela was undergoing routine tests.

"It is a well-known fact that Madiba is 92-years-old and no longer a young man," said Jackson Mthembu, the spokesman.

"As South Africans, let us all allow doctors at the hospital to do their best in conducting tests on our elder statesman. We also wish to confirm that Madiba is well taken care of at the hospital."

Madiba is the former president's clan name, which is popular in the country.

The spokesman also urged the media to "refrain from making unfounded and unwarranted speculation" on Mandela's health.

"We also request the media, in particular, to give Madiba's family and the hospital the necessary privacy," the spokesman said.

Mandela was flown to a Johannesburg hospital on Wednesday from Cape Town, where he was on vacation, according to a source close to his family who is not authorized to speak to the media.

"He is in no danger and is in good spirits," his foundation said in a statement.

Mandela rarely makes public appearances. His last appearance was at the closing ceremonies of the World Cup in South Africa over the summer.

He recently released a new memoir, "Conversations With Myself."

The Nobel Peace Prize laureate spent 27 years in prison after being convicted of sabotage and attempts to overthrow the government under South Africa's former apartheid regime.

He was released in 1990 and served as president four years later.