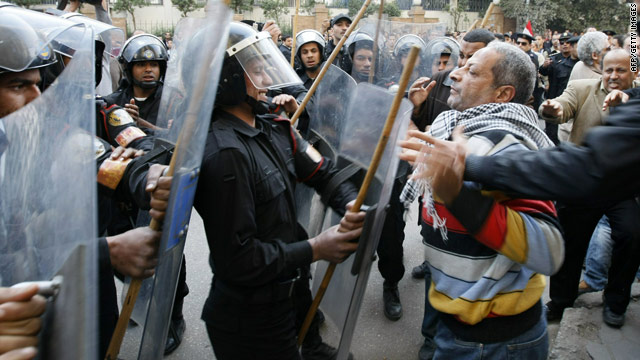 Cairo, Egypt (CNN) -- Hours ahead of what are expected to be massive displays of anti-government ferment across the world's most populous Arab nation, the internet went dark in parts of Egypt early Friday, and text messaging appeared to be blocked.

The Muslim Brotherhood has called for its followers to demonstrate after weekly Muslim prayers on Friday, the first time in the current round of unrest that the largest opposition bloc has told supporters to take to the streets.

Egyptian protests got 'so big so fast'
RELATED TOPICS

According to multiple web services that check whether servers used by specific sites are active, the servers of Egypt's main internet provider were down early Friday.

The servers for the Egyptian government's sites and for the U.S. Embassy in Cairo also appeared to be down.

"We are closely monitoring the situation and are aware that communication services, including social media, are being blocked," U.S. State Department Spokesman P.J. Crowley said Thursday. "We continue to urge Egyptian authorities to show restraint and allow peaceful protests to occur."

Facebook is aware of reports of service disruption and saw a drop in traffic from Egypt Thursday morning, company spokeswoman Jillian Carroll said in a statement.

Government officials could not be immediately reached to comment on the internet and text message situation.

Egypt's Interior Ministry said Thursday that no protests will be permitted on Friday, but some Egyptians were going door to door in Cairo on Thursday night, urging their neighbors to participate.

Opposition leader Mohamed ElBaradei arrived in Cairo on Thursday and said "there is no going back" on change.

ElBaradei, the Egyptian Nobel laureate, said people have taken to the streets because they "realize the regime is not listening, not acting."

"The barrier of fear is broken," ElBaradei said after he arrived in Egypt from Europe on Thursday. "And it will not come back."

Now ElBaradei has said he will take part in the protests and passed along "advice to the regime: It's now the time to listen to the people. Make an innocent collective change."

He called for demonstrations to be peaceful and for the government of President Hosni Mubarak to stop detaining and torturing people. He said that a violent response from the government is "counterproductive" and that the regime should promote democracy and social justice.

"I am asking the regime to listen to the people before it is too late," the opposition leader said, adding that he hopes to help broker a peaceful resolution to the unrest.

"A lot of the people out there protesting are middle class folks who are looking for a little more access, a little more opportunity," Biden said in an interview with PBS. "I think that President Mubarak is going to respond to the legitimate concerns that are being raised."

The U.S. Embassy in Cairo issued a message Thursday telling Americans that "areas where people congregate after Friday prayers should be avoided."

"While many of the demonstrations have focused on the downtown Cairo/Tahrir Square area, violent confrontations have occurred at other locations both in the Cairo metropolitan area and in Alexandria, Suez, and other cities," it said.

At least six have died in the demonstrations so far, according to the Interior Ministry and media reports.

Video from Sinai on Thursday showed a protester being shot after the person picks up a rock.

President Barack Obama urged the Egyptian government and demonstrators to refrain from violence.

"It is very important that people have mechanisms in order to express legitimate grievances," he said Thursday.

The State Department also weighed in on events in Egypt on Thursday, with Crowley saying, "We want to make sure that there's no interference with the opportunity for the Egyptian people to use social media."

Crowley's remarks followed reports that social media sites like Twitter have been blocked for many Egyptian users in recent days.

"To the extent that we obviously see that, country by country across the region, people are watching what has happened in Tunisia ... they are drawing lessons from what is happening," Crowley said.

With all eyes in Egypt focused on the protests, some events have been suspended. The Egyptian football federation has decided to postpone games scheduled for Friday and Saturday until further notice, according to Egypt's official news agency.

A smattering of protesters were in the streets on Thursday, after massive public protests on Tuesday and Wednesday calling for the ouster of Mubarak convulsed the nation and prompted a tough security crackdown.

One protester arrested in Tuesday's demonstrations told CNN Thursday that his nose and glasses were smashed by police before he was taken to a military camp and placed in a ward with about 300 other activists.

"The conditions were terrible because very few were allowed to go to the toilet, and we had to stand on the cold tiles of the floor (which were) very dirty," said Ahmed, who would not give his last name.

Ahmed said he was disappointed by the United States' reaction to the protests.

"The people of Egypt only want to see Egypt as a free, democratic country, and we would always assume that the United States is our model," he said. "We can't understand how come this leader of the free world is looking the other way when it comes to our rights or freedom."

"The despotic regime that (the U.S.) supports always demonizes the image of United States ... always putting blame on the United States for everything," Ahmed said of the Egyptian government.

Cairo was quiet Thursday compared with previous days, but there appear to have been smaller skirmishes, and more are anticipated as night comes.

In Suez, the port city east of Cairo on the Gulf of Suez, people congregated to demand the release of those detained, and clashes broke out between demonstrators and security forces. The city has long been home to resentment against the government for economic and social reasons.

Hani Abdel Latif, an Interior Ministry official, said that 50 people demonstrated peacefully in Ismaeliya. But there were news reports of clashes there.

In Egypt's Sinai region, there were clashes between security forces and protesters, television footage of the scene showed.

Egypt briefly closed its stock market Thursday after it fell sharply. It reopened about an hour later.

At the same time, Egypt's ruling NationalDemocratic Party made reference to the discontent on the streets. Secretary-General Safwat al-Sherif said the party wants to talk with the youths who have been at the forefront of the protests.

The protest movement in Egypt has been fueled by blogs and social media sites like Twitter and Facebook. ElBaradei, who is also the former head of the United Nations' nuclear watchdog agency, has been posting messages of support for the demonstrators on Twitter.

"We shall continue to exercise our right of peaceful demonstration and restore our freedom & dignity. Regime violence will backfire badly," he said in one of his latest tweets.

A Facebook page devoted to Friday's planned protests had more than 80,000 followers as of 2 p.m. ET Thursday, compared with 20,000 the previous day.

As he was waiting to leave Vienna, Austria, ElBaradei said he was going to Egypt to "make sure that things will be managed in a peaceful way."

"I have to give them as much support, political support, spiritual, moral support, whatever I can do, you know," he said. "I will be with them. They are my people, and I have to be there, and I'd like to see Egypt, a new Egypt."

In an interview Tuesday on CNN's "Connect the World," ElBaradei disputed a recent comment by U.S. Secretary of State Hillary Clinton that the Egyptian government is stable.

"Stability is when you have a government that is elected on a free and fair basis. And we have seen, you know, how the election has been rigged in Egypt. We have seen how people have been tortured," he said.

ElBaradei was asked whether he would run for the presidency of Egypt.

"The priority for me," he said, "is to shift Egypt into a democracy, is to catch up with the 21st century, to get Egypt to be a modern and ... moderate society and respecting human rights, respecting the basic freedoms of the people.

"Whether I run or not, that is totally irrelevant. And I made it very clear, I will not run under the present conditions, when the deck is stacked completely."

The outpouring of protests has led to unprecedented violence this week.

Police turned water cannons and tear gas on protesters Wednesday to try to break up anti-government demonstrations as the Interior Ministry warned it "will not allow any provocative movement or a protest or rallies or demonstrations."

In the heart of Cairo, people were being beaten with sticks and fists and demonstrators were being dragged away amid tear gas. Witnesses saw security forces harassing journalists and photographers. Demonstrations continued into the nighttime hours.

At least 27 people were wounded, Nile News said, most of them police officers. Quoting provincial officials, the station said most of the clashes took place in the Alarbeen neighborhood and that looters attacked some shops.

The Muslim Brotherhood said 35 people were injured in Suez and that security forces in the city had implemented a curfew there Wednesday night.

Families and friends of people slain in Suez said angry demonstrations occurred because police didn't hand over the bodies of those killed.