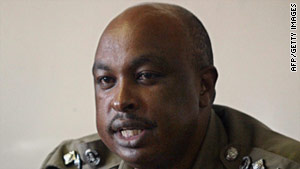 Kenya's largest newspaper, the Daily Nation, published the photos Thursday. It said they were taken by a motorist at the scene of the shooting in the capital.

The first photo shows a man described by the paper as an undercover officer pointing a gun at two men lying face down on the highway.

Another one shows the two men riddled with bullets lying in the middle of the road. A third shooting apparently took place, the paper said.

A police spokesman confirmed that three men were killed, and three officers have been suspended pending an investigation. "They (officers) are very much innocent until declared guilty, let's not forget that," Eric Kiraithe said by phone from Nairobi. "We are conducting an investigation and will have the results soon."

Kiraithe said the victims have criminal records, and one injured a police officer in a shooting last week.

"That said, they have their rights as human beings, of course, so it does not justify their deaths," he said.

The trio was compliant and had already surrendered, Amnesty International said in a news release.

A 2009 U.N. report accused Kenyan police of misusing its power, and called for the removal of the nation's police commissioner at the time.

"Killings by the police in Kenya are systematic, widespread and carefully planned. They are committed at will and with utter impunity," U.N. Special Rapporteur Philip Alston said in a statement.

The Kenyan government said it rejected the findings.